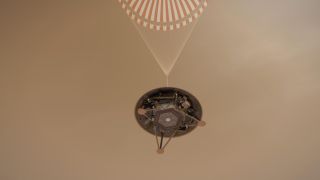 The Mars InSight lander has just touched down on the surface of the Red Planet at 11:54 a.m. PST (2:54 p.m. EST). It survived a fiery "6 minutes of terror," during which Earthbound NASA engineers waited in blindness as their craft pierced the Martian atmosphere and hurtled toward the surface.

The nearly 800-pound (360 kilograms) lander has now joined other robotic Martians, including Curiosity, Opportunity and Spirit. The successful landing is a feat of engineering and space savvy, as only about 40 percent of missions that have been sent to Mars (by any space agency) have met with success. And the U.S. is the only country to set a lander down safely on Mars.

As expected, Twitter erupted with Mars Madness. Here's a look at some of the most exciting reactions. [Mars InSight Photos: A Timeline to Landing on the Red Planet]

From Mars InSight, itself:

Nobody was perhaps more excited than mission control:

More excitement from a field geophysicist:

The lander is joining some of its veteran robotic pals: