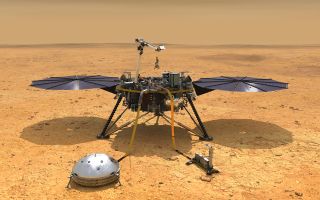 An artist's concept depicts NASA's InSight lander after it has deployed its instruments on the Martian surface.
(Image: © NASA/JPL-Caltech)

InSight is scheduled to touch down on Mars today (Nov. 26) at 3 p.m. ET, joining Mars' other robotic inhabitants: Curiosity, Opportunity and Spirit (though only Curiosity is currently "live," sending signals back to Earth).

You may be wondering if InSight will meet native forms of life during its stay on Mars; alas, that question will remain unanswered. The hardy little lander won't be spending its time searching for signs of Martian microbes. Instead, InSight will send a probe to burrow several feet below the planet's surface.

In doing so, InSight will provide a never-before-seen glimpse into Mars' internal structure, which could help scientists figure out how Mars — and other rocky planets, like Earth — took shape in a young solar system. [Mars Insight Photos: A Timeline to Landing on the Red Planet]

On the surface, Mars is covered in red dust that is rich in iron oxide; this coating earned it the nickname "Red Planet." Even when viewed from Earth without a telescope, Mars appears reddish in color as it hangs amid the stars — in fact, its bloody appearance inspired ancient astronomers to name the planet after the Roman god of war, according to NASA.

However, this signature red color doesn't extend very far below the surface, as Curiosity discovered in 2013. After drilling about 2.5 inches (6.4 centimeters) into a rocky outcrop, the rover extracted rock dust that was light gray, offering a first look at subsurface material on Mars.

But InSight will explore far beyond that, sinking a "self-hammering" probe that will dig itself into the ground to a depth of 10 to 16 feet (3 to 5 meters), for experiments measuring how the rock in the planet's interior conducts heat. [NASA's InSight Mars Lander: Full Coverage]

Curiosity, Opportunity and Spirit have already provided scientists with a wealth of data on Mars from samples collected on the planet's surface, revealing the composition of its minerals and showing that the planet might have been capable of supporting life in the distant past. Orbiting satellites have also revealed important puzzle pieces about Mars' climate makeup and orbit, and have even detected what are thought to be flows of salty liquid water.

But unlike these other missions, InSight — Interior Exploration using Seismic Investigations, Geodesy and Heat Transport — will gather information from inside the planet. In addition to the burrowing subsurface probe, InSight also carries seismometers that will measure "marsquakes" — tiny vibrations triggered by planetary activity under the planet's crust. As these tremors travel through rock, they reveal the thickness and composition of the planet's internal layers, NASA officials explained in a statement.

By mapping what Mars looks like on the inside, the InSight mission could also help to explain the violent processes that shaped other rocky planets in the solar system at the same time, William "Bruce" Banerdt, a research scientist at NASA's Jet Propulsion Laboratory (JPL) and the principal investigator for InSight, said in a video statement.

"InSight is a mission to Mars, but it's much, much more than a Mars mission. In some sense, it's like a time machine — it's measuring the structure of Mars that was put in place 4.5 billion years ago," Banerdt said.

"By studying Mars, we'll be able to learn more about Earth, Venus, Mercury, even the moon, even exoplanets around other stars," he added.