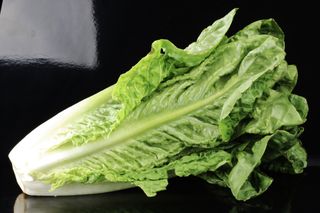 It's happening again: The Centers for Disease Control and Prevention (CDC) is warning Americans to avoid romaine lettuce.

So far, 32 cases have been reported in 11 states. In addition, 18 cases linked to the same outbreak have been reported in two Canadian provinces. Consumers are being advised to "not eat any romaine lettuce, and retailers and restaurants [should] not sell or serve any" until the CDC learns more about the outbreak.

If you have any romaine in your home, you should throw it away, even if some of it was already eaten and you did not get sick, the CDC says. The advisory applies to all types of romaine lettuce, including "whole heads of romaine, hearts of romaine, and bags and boxes of pre-cut lettuce and salad mixes that contain romaine, including baby romaine, spring mix and Caesar salad," the CDC says. If you don't know if lettuce is romaine, don't eat it.

Last spring, an E. coli outbreak in romaine lettuce killed five people and sickened more than 200 people in 36 states. The outbreak was first reported in March, and the CDC didn't declare the lettuce safe to eat until mid-May. In that outbreak, the source was traced to a contaminated irrigation canal in Yuma, Arizona.