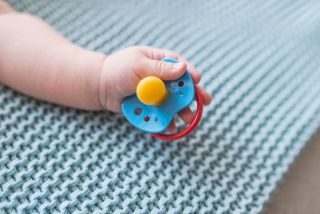 Four infants in Texas were hospitalized between mid-August and October of this year with an extremely rare condition, according to a Nov. 16 statement from the Texas Department of State Health Services. The condition? Botulism. And the suspected culprit? Honey-dipped pacifiers.

Botulism is a condition caused by a toxin that attacks the body's nerves, leading to muscle weakness, according to the Centers for Disease Control and Prevention. If the toxin attacks the nerves that send signals to muscles involved in breathing, it can lead to breathing problems that can be deadly, the CDC says. [Tiny & Nasty: Images of Things That Make Us Sick]

Botulinum toxins are produced by several different species of bacteria.

Bacterial spores of one of these species, called Clostridium botulinum, can be found in honey, according to a Nov. 16 statement from the U.S. Food and Drug Administration (FDA). If these spores are ingested by an infant, they can grow in the baby's intestines and release the deadly toxins. For this reason, the FDA, along with the CDC and the American Academy of Pediatrics, do not recommend feeding honey to infants younger than 1 the statement says.

Once babies reach 1 year of age, however, other types of bacteria are present in their gut, and these bacteria can prevent botulism bacteria from producing toxins, the Texas Department of State Health Services said. This means that it's safer to give honey to babies after age 1.

The four Texas infants had all used honey-coated pacifiers purchased from Mexico, according to the FDA statement. However, such products are also available online. The FDA is recommending that online retailers remove these products and is also recommending that caregivers discard any pacifiers that are filled with or dipped in honey, the statement said.

Symptoms of botulism can include double vision, drooping eyelids, difficulty swallowing or breathing, slurred speech and muscle weakness. In infants, symptoms can include a weak cry, lethargy, constipation, poor eating and a floppy appearance, according to the CDC.

Still, it's extremely important to seek medical care immediately if botulism is suspected, the CDC says. That's because, while antitoxins can stop the botulinum toxin from causing further damage in the body, they cannot undo damage that is already done.