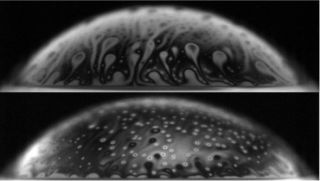 A bubble contaminated with bacteria (shown in the bottom panel) lasts much longer than a clean bubble.
(Image: © Image courtesy Lydia Bourouiba and Stephane Poulain, Massachusetts Institute of Technology.)

Innocent-looking bubbles can serve as a launching pad to spread bacteria from water into the air, according to a new study.

The study, published Nov. 15 in the journal Physical Review Letters, found that bacteria can manipulate the physics of bubbles in a way that enhances the microbes' spread. For example, bacteria-covered bubbles can last for a much longer time than clean bubbles, even though the bubble's surface thins out over time. Then, once they burst, these thinner bubbles create many more droplets, which are launched into the air at a faster rate compared with clean bubbles. [Tiny & Nasty: Images of Things That Make Us Sick]

"We discovered bacteria can manipulate [bubble] interfaces in a manner that can enhance their own water-to-air dispersal," study co-author Lydia Bourouiba, an assistant professor of civil and environmental engineering and director of the Fluid Dynamics of Disease Transmission Laboratory at the Massachusetts Institute of Technology, said in a statement.

The researchers first discovered the effect of bacteria on bubbles somewhat by chance. Initially, they were studying the physics of clean bubbles, but a beaker of water was accidentally left open during a move to a new lab. When the researchers later used this water in experiments, they observed that the bubbles acted differently than they expected.

"The bubbles produced from this water [lasted] much longer and had a peculiar thinning evolution compared to that of typical clean water bubbles," said study co-author Stephane Poulain, a graduate student in Bourouiba's lab.

When the researchers discovered that the water had been contaminated with bacteria, they turned their attention to studying the effects of bacteria on bubbles, using high-speed imaging.

They found that, when bubbles were contaminated with E. coli, they lasted 10 times longer than clean bubbles before bursting. This means the contaminated bubbles lasted for minutes as opposed to seconds. Further investigations revealed that the bubbles lasted longer because the bacteria were secreting substances that acted to reduce the bubble's surface tension, making it more elastic, the researchers said.

When they burst, these thinner bubbles created 10 times more droplets, and these droplets were ejected at a rate that was 10 times faster than it was for clean bubbles.

The researchers estimate that a single droplet can carry thousands of microorganisms, and each bubble is estimated to carry hundreds of droplets.

Previously, the same group of researchers used high-speed imaging to study droplets released from a human sneeze. Unsurprisingly, the results were gross.