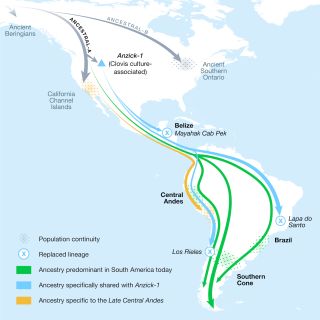 According to a new ancient DNA analysis, prehistoric people from different populations made their way across the Americas thousands of years ago.
(Image: © Michelle O’Reilly; Posth, Nakatsuka et al. 2018. Reconstructing the Deep Population History of Central and South America. Cell.)

People genetically linked to the Clovis culture, one of the earliest continentwide cultures in North America, made it down to South America as far back as 11,000 years ago. Then they mysteriously vanished around 9,000 years ago, new research reveals.

Where did they go? It appears that another ancient group of people replaced them, but it's unclear how or why this happened, the researchers said.

These findings, published online today (Nov. 8) in the journal Cell, suggest that this population turnover happened across the entire continent of South America. [In Photos: Human Skeleton Sheds Light on First Americans]

Previous research suggests that the first Americans diverged genetically from their Siberian and East Asian ancestors almost 25,000 years ago. These people traveled across the Bering Strait Land Bridge and eventually split into distinct North and South American populations. By about 13,000 years ago, people of the Clovis culture, known for its use of distinctive, pointy stone tools, swept across North America. Meanwhile, people were living as far south as Monte Verde, Chile by least 14,500 years ago, according to archaeological findings there.

But little was known about how members of the Clovis culture were linked to other populations farther south.

To unravel the genetic mysteries of the these ancient Americans, the researchers reached out to indigenous peoples and government agencies all over Central and South America, asking for permission to study the remains of ancient peoples that have been discovered over the years.

In all, the international team of scientists was given permission to do genomewide analyses on 49 ancient people whose remains were unearthed in the following Central and South American countries: Belize, Brazil, Peru, Chile and Argentina. The oldest of these people lived about 11,000 years ago, marking this as a study that takes a big step forward from previous research, which only included genetic data from people less than 1,000 years old, the researchers said.

Their findings showed that DNA associated with the North American Clovis culture was found in people from Chile, Brazil and Belize, but only between about 11,000 to 9,000 years ago.

"A key discovery was that a Clovis culture-associated individual from North America dating to around 12,800 years ago shares distinctive ancestry with the oldest Chilean, Brazilian and Belizean individuals," study co-lead author Cosimo Posth, postdoctoral researcher of archaeogenetics at the Max Planck Institute for the Science of Human History in Germany, said in a statement. "This supports the hypothesis that the expansion of people who spread the Clovis culture in North America also reached Central and South America." [In Photos: New Clovis Site in Sonora]

Curiously, around 9,000 years ago, the Clovis lineage disappears, the researchers found. Even today, there is no Clovis-associated DNA found in modern South Americans, the researchers said. This suggests that a continentwide population replacement happened at that time, said study co-senior researcher David Reich, a professor of genetics at Harvard Medical School and a Howard Hughes Medical Institute investigator.

Following this mysterious disappearance, there is a surprising amount of genetic continuity between people who lived 9,000 years ago and those living today in multiple South American regions, the researchers said.

The Cell study also revealed a surprising connection between ancient people living in California's Channel Islands and the southern Peruvian Andes at least 4,200 years ago. It appears that these two geographically distant groups have a shared ancestry, the researchers found.

It's unlikely that people living in the Channel Islands actually traveled south to Peru, the researchers said. Rather, it's possible that these groups' ancestors sallied forth thousands of years earlier, with some ending up in the Channel Islands and others in South America. But those genes didn't become common in Peru until much later, around 4,200 years ago, when the population may have exploded, the researchers said. [In Photos: 130,000-Year-Old Evidence of Humans in California]

"It could be that this ancestry arrived in South America thousands of years before and we simply don't have earlier individuals showing it," study co-lead researcher Nathan Nakatsuka, a research assistant in the Reich lab at Harvard Medical School, said in the statement. "There is archaeological evidence that the population in the Central Andes area greatly expanded after around 5,000 years ago. Spreads of particular subgroups during these events may be why we detect this ancestry afterward."

Although these findings shed light on early Americans, it's far from complete. The researchers acknowledge that they don't have human remains that are older than about 11,000 years old, "and thus we could not directly probe the initial movements of people into Central and South America," they wrote in the study. Moreover, although the study looked at 49 people who lived between about 11,000 and 3,000 years ago, the research would be more comprehensive if more ancient individuals from different regions were included, the researchers said.

"We lacked ancient data from Amazonia, northern South America and the Caribbean, and thus cannot determine how individuals in these regions relate to the ones we analyzed," Reich said in the statement. "Filling in these gaps should be a priority for future work."