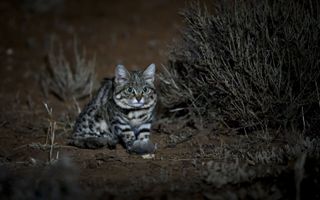 The deadliest cat on Earth isn't a shaggy-maned lion, a sleek leopard or a stealthy tiger. It's a wee cat that you've probably never heard of: Africa's smallest feline, the black-footed cat.

Native to the grasslands of southern Africa, the black-footed cat has an endearingly round face and a light brown, black-spotted body that is small even compared to domestic cats. The wild feline measures only 14 to 20 inches (36 to 52 centimeters) long, stands about 8 inches (20 cm) tall and weighs about 2 to 6 lbs. (1 to 3 kilograms), according to the International Society for Endangered Cats (black-footed cats are listed as "vulnerable" by the International Union for Conservation of Nature).

Admittedly, those measurements don't sound very impressive when compared to the sizable big cats that are among the world's most fearsome predators. But despite its small size, the black-footed cat hunts and brings down more prey in a single night than a leopard does in six months, according to the PBS Nature miniseries "Super Cats." [Meet the Rare and Fabulous Felines of 'Super Cats' (Photos)]

The second episode in the miniseries aired on PBS last night (Oct. 31). It featured an unprecedented glimpse of the black-footed cat, along with views of other fascinating and elusive wild felines, such as a pregnant jaguar in Costa Rica, a rare swamp tiger in India and a family of fishing cats — the only semiaquatic cats — in the wetlands of Asia.

For the latest episode, titled "Cats in Every Corner," filmmakers captured never-before-seen views of black-footed cats by collaborating with researcher Alexander Sliwa, a curator at the Cologne Zoo in Germany who has studied the black-footed cat since the 1990s. Through Sliwa, the series' makers gained access to several small cats that had already been fitted with radio collars at a study site in South Africa, "Super Cats" producer Gavin Boyland told Live Science.

Filming the tiny cats proved unusually challenging, Boyland said. Because the black-footed cats are so small, they're harder to track through tall grasses than big cats are. Since the little cats hunt mostly at night, the production crew needed to use a special light-sensitive camera to detect the felines at all, recording footage of hunting behavior that had never been captured before, Boyland explained.

And when it comes to hunting, as the filmmakers saw, the black-footed cat is extraordinarily efficient — "a real powerhouse," said Luke Hunter, Chief Conservation Officer at Panthera, a global wildcat-conservation organization.

Hunter, who served as a scientific consultant for "Super Cats," explained that small predators like the black-footed cat have accelerated metabolisms, which they need to keep fueled all the time, "so they're constantly hunting," he said.

Black-footed cats use three very different techniques to nab their prey. One method is known as "fast hunting," in which the cats bound quickly and "almost randomly" through the tall grass, flushing out small prey such as birds or rodents, Hunter said. Another of their methods takes them on a slower course through their habitat, with the cats weaving quietly and carefully to sneak up on potential prey.

Finally, they use a sit-and-wait approach near rodents' burrows, a technique called still hunting, Hunter said.

"They wait for up to 2 hours, [staying] absolutely immobile, just silently waiting at the burrow for a rodent to appear. And then they nab it," Hunter told Live Science.

"The deadliest little cat on Earth"

In one night, a black-footed cat kills between 10 and 14 rodents or small birds, averaging a kill about every 50 minutes, according to Hunter. With a 60 percent success rate, black-footed cats are about three times as successful as lions, which average a successful kill about 20 to 25 percent of the time, Hunter said.

"If you're a gazelle or a wildebeest, a black-footed cat isn't at all deadly. But those success rates make them the deadliest little cat on Earth," he said.

Black-footed cats represent but one species in a highly diverse feline family, many of which are difficult to observe in the wild and are not well-understood. And though most of the felines that appear in "Super Cats" face serious threats of habitat loss and destruction from human activity, conservation efforts can yet preserve vulnerable populations, Hunter said.

"I believe it's mostly not doom and gloom. But if we don't actively conserve these species, if we don't work to reduce those threats, then we could lose some of these animals," he added.

Episode 2 of "Super Cats" is available to stream beginning today (Nov. 1). You can also watch Episode 1 — "Extreme Lives" — and learn more about the miniseries on the PBS Nature website and on PBS apps. Episode 3, "Science and Secrets," premieres Wednesday, Nov. 7, at 8 p.m. on PBS (check local listings).