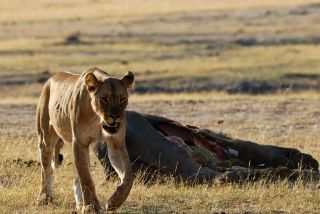 A lioness leaving an elephant carcass; researchers have found lionesses often leave the scenes of their crimes since prey are likely on high alert.
(Image: © Stéphanie Périquet)

Lions apparently flee the scenes of their crimes, withdrawing after successful kills while other potential prey are still on high alert, researchers have found by using satellites to track some of the deadly African cats.

This research into the minds of lions sheds light on why and when large predators move on from one hunting ground to the next, a crucial decision when the stakes are survival or starvation. In turn, such insights could lead to better designs of protected areas for African lions, whose numbers have shrunk by half in 30 years.

Deciphering the strategies of predators is difficult enough when they are captive, not to mention when they are free to range far in the wild.

"Such fieldwork is time-consuming, difficult and potentially dangerous," said researcher Marion Valeix, an ecologist at the University of Oxford in England and the French National Center for Scientific Research.

Scientists have had two ideas regarding why large mammalian carnivores depart a hunting ground. In the "unsuccessful hunt" hypothesis, predators hunt everything they can and then move on. In the alternate "patch disturbance" hypothesis, hunters leave after a successful kill to give remaining prey time to lower their guard — allowing the predators to return and blindside them. [Lions Attack Humans When Full Moon Wanes]

Scientists matched the whereabouts of these big cats with 164 lion kills tracked down between 2005 and 2007. They found that after 87 percent of kills, the lions traveled at least three miles (five kilometers) or more, suggesting they were departing the scenes of their crimes.

"We showed the need for these animals to rotate their hunting between several hunting grounds — for example, waterholes in the Hwange ecosystem," Valeix told LiveScience. "This has implications regarding the configuration and size of lion home range and needs to be taken into account in the design of small conservation reserves."

Most studies focusing on large carnivores have considered them and large herbivores to be rather static variables.

In the future, the scientists plan to study both the behavior of predator and prey at the same time. They detailed their new findings in the August issue of the journal American Naturalist.