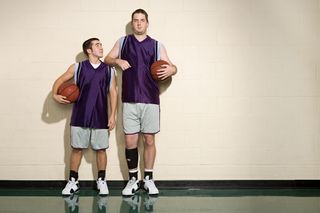 The taller you are, the greater your risk of cancer may be, a new study finds.

The idea that there may be a link between height and cancer risk has been around since the 1950s, according to study author Leonard Nunney, an evolutionary biologist at the University of California, Riverside. So, he decided to investigate.

For the study, which was published Oct. 24 in the journal Proceedings of the Royal Society B, Nunney analyzed data from four large-scale studies totaling hundreds of thousands of cancer patients. He found that every additional 10 centimeters (4 inches) in height was associated with a 10 percent increase in cancer risk.

Still, the findings do not prove that being tall increases cancer risk; rather, they found an association between height and cancer risk. [10 Do's and Don’ts to Reduce Your Risk of Cancer]

The link between height and cancer risk, however, could have a rather simple explanation: Taller people have more cells in their bodies, Nunney told Live Science.

"We can only speculate" why the risk of those four cancers wasn't linked to height, Nunney said. "The types of cancers where we don't see the obvious link with height are traditionally associated with significant environmental influences." For example, mouth cancer is associated with factors including alcohol consumption and smoking.

Nunney said that he would generally expect to see a similar effect on cancer risk regardless of the organ in which the cancer starts, because taller people tend to have larger organs, which therefore consist of more cells. (Obesity, on the other hand, doesn't increase the number of cells in the body, but instead makes certain cells larger, he added.)

The study found that for thyroid and skin cancer, height appeared to be an even stronger risk factor than it was for other cancer types. And for thyroid cancer, for example, other variables, like sex and nationality, also came into play. The study found that taller Korean women were more likely to develop thyroid cancer than shorter men and women of other nationalities. The risk of skin cancer might be higher in people with higher levels of the growth hormone IGF-1, Nunney said.

"Previous studies have shown that taller people tend to have higher levels of IGF-1," Nunney said. "And there is data that suggests that having higher IGF-1 levels in adulthood leads to faster cell division."

Humans aren't the only animals in which body size and cancer risk may be linked, Nunney said. Larger dog breeds, for example, tend to be more likely to develop cancer than smaller ones.

However, this effect doesn't translate between animal species, Nunney said; in other words, a whale isn't more likely to get cancer than a mouse. In fact, large species, such as whales and elephants, appear to live longer than smaller animals and are less likely to develop cancer. And that, Nunney said, gives humans something to study.

"It seems that during evolution, larger animals have developed additional layers of cancer suppression," Nunney said. "If we find out how these additional layers work, we might be able to take advantage of that."