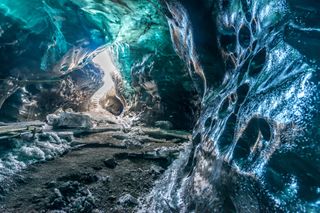 There's a new kind of ice.

It forms at speeds of more than 1,000 mph (1,600 km/h), it lies deep beneath our feet, it could destroy hopes for alien life, and — finally — scientists understand how it works.

Back in March, researchers writing in the journal Science revealed that they have found the first evidence for this ice, called "Ice VII." Scientists had predicted its existence beforehand. Under the right conditions, it was believed, ice could form in a pool of water without a layer of heat at the leading edge of its growing surface. That — along with super-intense pressures and temperatures — would allow the ice to form without most of the usual brakes that slow its growth, Science Alert reported. It would also have a different crystal structure, or arrangement of atoms. Now, scientists say they've found that elusive ice for the first time in the frozen-water cores of diamonds that bubbled up from deep inside the Earth.

The diamonds, which contained Ice VII, had come from a point inside the planet known as the mantle's "transition zone,"  between 255 miles and 410 miles (410 and 660 kilometers) deep. (The mantle is the rocky layer between Earth's crust and core). And they knew that it had a crystal structure very different from the sort of ice that forms in clouds or lakes or in your freezer. [9 Strange, Scientific Excuses for Why We Haven't Found Alien Life Yet]

But they didn't know precisely how it formed, or what caused it to form that way.

New research, published Oct. 10 in the journal Physical Review Letters, found that there are particular combinations of temperature and pressure at which Ice VII forms. The mysterious Ice VII begins to form at 20,700 times Earth's atmospheric pressure at sea level and 40.7 degrees Fahrenheit (4.9 degrees Celsius), and the pressure/temperature combinations get only more intense from there.

This could pose problems for the hunt for alien life, Physics Central reported. Pressure spikes — say, from meteor impacts — could cause the explosive formation of Ice VII on watery planets otherwise suited to alien life. But the mass formation of this cubic ice at ripping speeds would likely prevent any such life from forming or surviving. On worlds where this happens, life could get snuffed out before it really began.