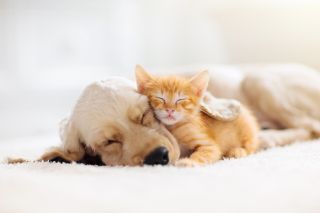 Everyone gets to sleep in on Sunday.
(Image: © Shutterstock)

This Sunday, people across the United States can rest easy, literally, as they'll get an extra hour of sleep because daylight saving time comes to an end.

The change happens at 2 a.m. local daylight time on Nov. 3. While most wireless devices will "fall back" on their own, it's up to you to switch manual clocks — including those on microwaves, ovens and wristwatches — one hour back.

This means that as soon as the clock ticks to 2 a.m. on Sunday, it can be turned back to 1 a.m.

Daylight saving (not savings, as it's sometimes called) time won't start again until March 8, 2020, when the United States will, once again, "spring forward" an hour. [Daylight Saving Time 2018: A Guide to the When, Why, What and How]

Daylight saving time (DST) is the brainchild of Benjamin Franklin. The famous inventor and American politician reasoned that because the sun sets later in the spring and summer, Americans might save energy if they turned their clocks forward an hour, giving them an extra hour of natural light (no need to use artificial light), according to David Prerau, author of "Seize the Daylight: The Curious and Contentious Story of Daylight Saving Time" (Thunder's Mouth Press, 2005).

However, it wasn't until 1916 that a country, Germany, implemented DST; the United States adopted it in 1918.

Moreover, it's unclear whether DST actually saves energy. Several studies, including a 1998 study in Indiana and a 2000 study in Australia, showed no energy savings from DST, Live Science previously reported. However, in 2018, researchers published a review of 44 studies looking at any link between DST and energy use. Their meta-analysis showed a slight decrease (0.34%) in electricity use on days where DST applied, according to their study published in The Energy Journal.

Regardless, DST persists despite dozens of bills introduced in state legislatures over the years to end it. Two states, Hawaii and Arizona, don't observe the time change, although Navajo Nation, in northeastern Arizona, does, according to NASA.

What's more, DST in the United States doesn't match up with clock changes in Europe, which stopped observing "summer time" for the year on Oct. 27. Europe will start following summer time again on March 29, 2020.

Traffic accidents also increase on the Mondays after both the fall and spring time changes, a 2001 study in the journal Sleep Medicine found.

However you spend your extra hour, remember this: Your pets don't know about the time change, so be kind to them: they may get hungry an hour earlier, Live Science previously reported.