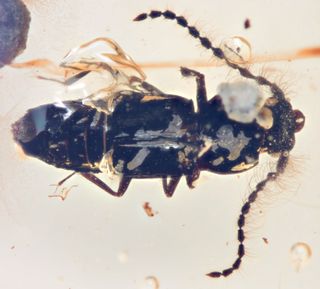 A minuscule beetle trapped in amber for 99 million years reveals that Myanmar was once one with South America.

The rare find, a new species called Propiestus archaicus, is an ancestor of detritus-dwelling rove beetles, which are found today only in South America and in southern Arizona. The discovery of this anthropod ancestor from the Cretaceous period in Myanmar (formerly Burma) helps clarify when and how the continents shifted from two huge land masses then to the seven continents we know today. [Image Gallery: Tiny Insect Pollinators Trapped in Amber]

"Although Propiestus went extinct long ago, our finding probably shows some amazing connections between [the] Southern Hemisphere and Myanmar," lead study author Shuhei Yamamoto, a researcher at the Chicago Field Museum, said in a statement.

Yamamoto coaxed the beetle fossil from a penny-size piece of amber found in the Hukawng Valley of northern Myanmar. The amber is hardened tree sap from the Late Cretaceous period, which was dirtied and opaque from ages of accumulated dirt and organic material. Yamamoto used delicate tools and sandpaper to cut and polish the amber just enough to make the beetle visible.

"There wouldn't have been a lot of space available in the beetle's habitat, so it was important to be able to detect everything," Yamamoto said.

Today, rove beetles are a huge group, with more than 63,650 species found worldwide. The subfamily that P. archaius belongs to, Piestus, is today exclusively a Southern Hemisphere phenomenon, except for one species found in southern Arizona, the researchers reported today (Oct. 30) in the Journal of Systematic Palaeontology. This is the first time a member of the subfamily has been found in Burmese amber, the researchers wrote, though a couple of related fossils have been found in rock in northeastern China.

Along with other fossils of insects found in Burmese amber, the tiny new beetle suggests that Myanmar was once part of Gondwanaland, a sprawling megacontinent that formed after the breakup of Pangea. It consisted of much of the continental mass that makes up the Southern Hemisphere continents today. During the Cretaceous period, Gondwanaland itself was rifting apart into land masses more recognizable as today's continents. Tracing the location of today's species and their fossil ancestors can help pinpoint when those rifts occurred. Though DNA evidence would be necessary to truly pin down Piestus' historical journeys, the researchers wrote, it seems possible that the group originated in Gondwanaland.

"Our finding fits well with the hypothesis that, unlike today, Myanmar was once located in the Southern Hemisphere," Yamamoto said.