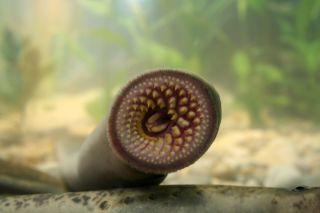 The toothy maw of a lamprey fish.
(Image: © PEDRE/Getty Images)

Deep in a medieval cesspit in the middle of London, researchers made a spooky discovery: the razor-sharp teeth of a vampire-like river lamprey (Lampetra fluviatilis).

These parasitic, jawless fish use their disk-shaped sucking mouths and circular rows of teeth to latch onto and gnaw away at host fish. But despite their gruesome appearance, lampreys are considered a delicacy in a few countries today, thanks to their rich taste and meaty texture.

But the strange-looking fish were especially prized among foodies centuries ago, in medieval England. Indeed, Henry I died at age 68 in 1135 after, it's said, eating "a surfeit of lampreys" against the orders of his doctor, according to his chronicler, Henry of Huntingdon. [Photos: The Freakiest-Looking Fish]

Though lampreys show up often in the historical record, the fish have left little trace in the archaeological record. That may be because the skeletons inside lampreys' eel-like bodies are made of cartilage and their teeth are made of keratin (the same stuff as hair and fingernails) —two materials that are not likely to be preserved after centuries buried underground. (Lamprey remains have only been found in two other archaeological sites in the U.K.)

So it was particularly exciting when Alan Pipe, senior archaeozoologist at the Museum of London Archaeology (MOLA), found a few rows of what appeared to be lamprey teeth while sifting through the finds from a waterlogged cesspit discovered during excavations

near the Mansion House station in London. Pipe and his team deduced that the lamprey had probably been eaten sometime between 1270 and 1400, when the cesspit was in use.

"Almost everything we know about the popularity of lampreys in medieval England comes from historical accounts," Pipe said in a statement from MOLA. "It is incredibly exciting, after 33 years of studying animal remains, to finally identify traces of the elusive lamprey at the heart of the historic City of London, preserved in the waterlogged ground near the [river] Thames."

The lamprey lineage has been around for 360 million years. River lampreys are just one of the three species that used to be common in the U.K. (The other two are brook lampreys and sea lampreys.) All are now protected species.

MOLA officials said the excavations near Mansion House are now finished and the teeth as well as other finds are still being analyzed.