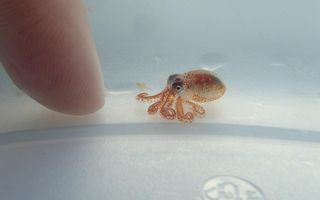 A baby octopus the size of a pea was hitchhiking on a piece of plastic floating in the Pacific Ocean when Hawaiian researchers spotted it and scooped up the smol, smol cephalopod.

Photos shared on Facebook by Hawaii's Kaloko-Honokōhau National Historical Park show the wee baby rescued from the trash and huddled in a plastic tub, its spotted arms curled daintily under its bulging eyes and mantle.

In one of the park's images, the baby cephalopod is dwarfed by a marine biologist's fingertip; the octopus is too tiny to comfortably hug a human finger with all its arms. [8 Crazy Facts About Octopuses]

Park researchers were monitoring coral reefs in August when they spotted the charismatic eight-armed stowaway on a piece of floating plastic debris, park representatives wrote on Facebook. After posing for a few pictures, the octopus was released "safe and sound in a small protected space" by a member of the Geoscientists in Parks dive team, according to the post (an image of the octopus recently went viral after the U.S. Department of the Interior shared it on Instagram earlier this week).

Even though baby octopuses are small, they can also be deadly (to other very small creatures, that is). A second tiny octopus, also found on the plastic trash by the Hawaiian dive team, was discovered while squeezing the life out of equally tiny prey — a baby crab — prompting a park representative to pose the question: "Maybe they aren't so cute?"

Octopuses are known for their intelligence, and their oddball biology is so unusual that it recently inspired a team of 33 researchers to report that octopuses were extraterrestrial in origin, their frozen eggs carried to Earth millions of years ago by icy comets. However, biologists scoffed at the prospect of alien octopuses — a hypothesis that has zero evidence to back it up, Live Science previously reported.

As one of the baby octopuses swam away from its human rescuers, it bid them farewell with a tiny squirt of ink, Beavers told the AP.