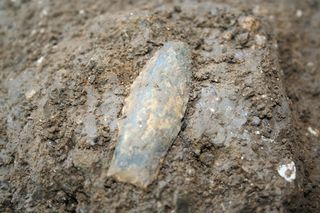 A stemmed point that is about 15,000 years old. It's made out of chert, a type of sedimentary rock.
(Image: © Center for the Study of the First Americans/Texas A&M University)

Archaeologists have unearthed what are potentially the oldest weapons ever found in North America: eleven spearpoints dating to about 15,500 years ago, a new study finds.

If the discovery, located about 40 miles (64 kilometers) northwest of Austin, Texas, can be verified, it could strengthen the argument that people settled the Americas earlier than previously thought. But not all experts are convinced by the evidence, with some saying the dating techniques used are unconventional.

The stone-made spearpoints, each measuring up to 4 inches (10 centimeters) long, are so old they predate the Clovis people, who for decades were thought to be the first people to populate the Americas. [In Photos: New Clovis Site in Sonora]

"There is no doubt these weapons were used for hunting game in the area at that time," Michael Waters, a distinguished professor of anthropology and director of the Center for the Study of the First Americans at Texas A&M University, said in a statement.

Who were the first Americans?

Exactly how and when the first people reached the Americas is still a mystery. Most researchers agree that the first Americans left northwest Asia and southern Siberia between 25,000 and 20,000 years ago and then traveled to the area of the now-submerged Bering Strait land bridge. But scientists disagree on how long they stayed in this region, known as Beringia, and which route people took from there — for instance, whether ancient people traveled inland or along the coast.

The timing of this incredible journey is also up in the air. For decades, researchers believed the first inhabitants of North America were part of the Clovis culture, which lasted from 13,000 to 12,700 years ago. But archaeological evidence suggests that people made it all the way to Monte Verde, Chile, at least 14,500 years ago, and there are other, more controversial sites in the Americas that suggest they were peopled even earlier.

Almost all of these pre-Clovis sites have some stone tools, but the Texas site — the Debra L. Friedkin site, named for the family that owns the land — also has weapons that were clearly made by pre-Clovis people, Waters said. The pointy spears were discovered beneath a layer that held projectile points made by the Clovis and Folsom peoples. (The Folsom people followed the Clovis culture, Waters said.)

"The dream has always been to find diagnostic artifacts — such as projectile points — that can be recognized as older than Clovis, and this is what we have at the Friedkin site," Waters said.

It's no surprise that so many cultures lived in this spot, since it had fresh water year-round, Waters told Science Magazine.

The pre-Clovis layer holds about 100,000 artifacts, including 328 tools and 12 complete and fragmentary projectile points, the researchers wrote in the study.

The soil around the newfound weapons dates to between 13,500 and 15,500 years ago, the researchers said. However, the team couldn't use radiocarbon dating because there weren't any carbon samples in that layer that could give a reliable and accurate age, the researchers wrote in the study. Rather, they used optically stimulated luminescence (OSL), which reveals how long ago quartz grains in the surrounding sediment were exposed to sunlight.

But this dating method has raised the eyebrows of other archaeologists. While the discovery provides important new details about the Friedkin site, the dating of these artifacts would be strengthened if the researchers relied on more than just OSL, Ben Potter, a professor of archaeology at the University of Alaska Fairbanks, who wasn't involved with the research, told Gizmodo.

"This study relies almost exclusively on OSL dating and the comparison of a single class of artifacts —projectile points — not on genetics, or detailed technological, economic, or paleoecological analyses," Potter told Gizmodo. "Arguments about ethnogenesis [origin] and population relationships on the basis of [stone artifacts] alone are difficult at best."

But Waters thinks the findings help paint a nuanced picture of the first Americans.

"The findings expand our understanding of the earliest people to explore and settle North America," Waters said. "The peopling of the Americas during the end of the last ice age was a complex process and this complexity is seen in their genetic record. Now, we are starting to see this complexity mirrored in the archaeological record."

The study was published online Wednesday (Oct. 24) in the journal Science Advances.