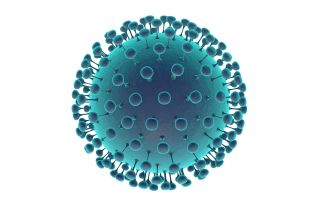 A high-resolution imaging technique for viruses revealed that their surfaces aren't perfect spheres after all.
(Image: © Shutterstock)

Last week, scientists proved that electrons are round — a discovery that threw physicists into a tailspin. Now, other scientists might be equally dismayed to hear that the opposite is true about another questionably round subject: spherical viruses. Turns out that they aren't as round as everyone thought, a new study finds.

Setting aside the feelings of disappointed sphere lovers, the findings could play an important role in the field of virology: They could affect how viruses are studied and may impact strategies used to treat viral diseases, according to the study.

Certain types of viruses are icosahedral, or 20-sided. Since the 1950s, these viruses were viewed as symmetrical spheres, with 20 triangular facets equally distributed concentrically over their surfaces. [Tiny & Nasty: Images of Things That Make Us Sick]

The long-assumed geometry of these viruses was shaped by scientists' understanding of how proteins replicate, which suggested that viruses were built from many identical copies of the same protein structure, said study co-author Michael Rossmann, a professor in the Department of Biological Sciences at Purdue University in Indiana. All of these identical copies would therefore come together to form a symmetrical shape.

Indeed, examination of spherical viruses under the microscope since the 1950s reinforced the notion of their symmetry. It turned out, however, that scientists weren't seeing the whole picture.

So, it came as a big surprise when Rossmann and his colleagues discovered that flaviviruses — a genus that includes Zika and dengue — were asymmetrical, he explained.

"Because for many decades all studies of viruses have assumed symmetry, we had not been looking at viruses with sufficient care. We were making assumptions which overrode those variations," Rossmann told Live Science.

In the new study, published online Oct. 22 in the journal Proceedings of the National Academy of Sciences, Rossmann and his colleagues used cryo-electron microscopy, or cryo-EM, to generate high-resolution 3D models of a flavivirus. By cooling specimens to extreme temperatures, cryo-EM reveals details of viruses at the atomic level.

Because spherical viruses were thought to be perfect spheres, this approach was typically finalized with a processing technique known as a symmetry requirement, which created a symmetrical model from the data, the scientists reported.

For the new study, the researchers omitted that last step. They looked at immature and mature Kunjin viruses (a subtype of West Nile virus), and in both forms they found bumps that stuck out on one side of the virus. In other words, goodbye symmetry.

These bumps take shape when a young virus buds from another virus inside a host cell, according to the study. As proteins in the new virus's outer membrane scramble to close up the opening, they form a shape that isn't as perfect as the other facets on the virus's surface, said study co-author Richard Kuhn, also a professor with Purdue's Department of Biological Sciences.

"The neck of this budding particle gets very narrow as it pinches off, and the [proteins] surrounding the shell begin hitting one another," Kuhn said in a statement. "We think they might not grab the right number of proteins to make an icosahedron, and the result is a particle that has a distortion on one side."

The scientists also discovered that immature viruses had irregularly positioned nucleocapsids, or core structures. In young viruses, the core lay closer to one side of the external shell, though it repositioned to the center by the time the virus matured, the researchers wrote in the study.

These newfound irregularities likely offer insights into how new viruses assemble themselves as they grow in an infected cell, and uncovering these features and how they work could offer researchers new targets for antiviral treatments, Rossmann said.