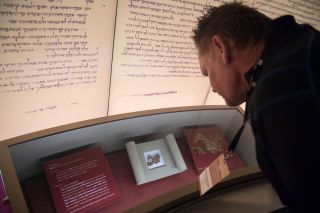 A "Dead Sea Scroll" fragment on display at the Museum of the Bible in Washington, D.C.
(Image: © Saul Loeb/AFP/Getty Images)

At least five of the 16 "Dead Sea Scroll" fragments in the Museum of the Bible are fakes, an independent study has concluded.

The Museum of the Bible, which opened in Washington, D.C., last year, had been under scrutiny for publishing and displaying the texts despite their murky origins. The museum sent five of its alleged Dead Sea Scroll fragments to Germany's Federal Institute for Materials Research and Testing (BAM) in Berlin for an investigation that included X-ray scanning and ink analysis.

The museum announced today (Oct. 22) that those five fragments "show characteristics inconsistent with ancient origin"; in other words, they are not 2,000-year-old texts, but instead more-recent forgeries. The scroll fragments will no longer be displayed, the museum said.

The real Dead Sea Scrolls represent the earliest surviving pieces of the Bible's Old Testament. The hundreds of original scrolls were found in the mid-20th century in the Qumran caves in the West Bank of Israel. In the last two decades, more fragments have emerged on the antiquities market, prompting some suspicion about where they came from. [7 Secrets of the Dead Sea Scrolls Revealed]

Several of those newly surfaced fragments were purchased by the funders of the Museum of the Bible, the Green family, which owns the Hobby Lobby craft store chain. Scholars who spoke to Live Science last year had criticized the museum for publishing descriptions of the fragments in 2016 without fully investigating the origins of the texts. Some researchers raised concern that several fragments looked like fakes.

"My studies to date have managed to confirm upon a preponderance of different streams of evidence the high probability that at least seven fragments in the museum's Dead Sea Scrolls collection are modern forgeries, but conclusions on the status of the remaining fragments are still forthcoming," Kipp Davis, a scholar at Trinity Western University in Canada, said in today's press release from the museum.

Davis had been involved in the museum's initial 2016 publication of the scroll fragments, but later wrote about his questions concerning the authenticity of some of the texts.

The five "Dead Sea Scroll" fragments that had been on display have been replaced with three other fragments "pending further scientific analysis and scholarly research," the museum said in the statement. "Exhibit labels will continue to inform guests that there have been questions raised about the authenticity of these fragments and that further research will be conducted."

This is not the first controversy over the sources of the museum's collection. Last year, Hobby Lobby was ordered to pay a $3 million forfeiture and to hand over thousands of artifacts after illegally importing cuneiform tablets, clay stamp seals and other ancient Mesopotamian items from Iraq.