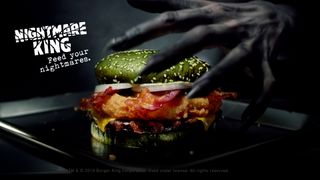 A new, limited-time-only burger at Burger King has a peculiar selling point: It's supposed to give you nightmares.

Yes, Burger King's Halloween-themed "Nightmare King" burger is allegedly "clinically proven" to induce nightmares, according to a press release from the company.

The fast-food chain commissioned a sleep study to bolster their claims that the green-bunned burger causes bad dreams. Needless to say, that study hasn't been published in a peer-reviewed journal. And what little peer-reviewed data there is on food and nightmares suggests that, if anything, fast food should, in fact, reduce bad dreams. [11 Ways Processed Food Is Different from Real Food]

To show that its Halloween concoction actually causes nightmares, Burger King commissioned Florida Sleep and Neuro Diagnostic Services Inc. to track the sleep and dreams of 50 people, 25 of whom ate the chicken-beef-bacon Nightmare King before bed and 25 of whom did not. Seven of the participants who ate the sandwich reported nightmares, compared with two who didn't eat the sandwich, according to a publicist for Burger King.

"According to previous studies, 4 percent of the population experiences nightmares in any given night," Dr. Jose Gabriel Medina, a sleep specialist who led the study, said in the company's statement. "But [for people who slept] after eating the Nightmare King, the data obtained from the study indicated that the incidence of nightmares increased by 3.5 times."

Burger King attributed this spooky effect to the burger's "unique combination of proteins and cheese," which the company says disrupt a person's rapid eye movement (REM) sleep. This is the part of sleep when most dreaming occurs.

So, what does the scientific community say about fast food and dreams? Not much. There are very few studies on diet and dreams. But research does suggest that, if anything, fast food suppresses nightmares.

A 2007 study in the journal Psychological Reports asked approximately 50 undergraduates to report their dreams and their food preferences. People who reported preferring fast food, chips and other carbs were less likely to report remembering their dreams at all compared to people who liked organic food. A larger, 2015 study in the journal Frontiers in Psychology asked almost 400 students about sleep and food, finding that people who reported unhealthy diets also reported relatively few vivid dreams.

For nightmares, specifically, the 2015 study found no link between diet and bad dreams. The 2007 study found that people who reported liking junk food more had fewer nightmares. [7 Mind-Bending Facts About Dreams]

On the other hand, there is some evidence that fasting leads to more-vivid dreams, according to the 2015 study. Participants in that study who reported going longer between meals or snacks during the day also reported more-vivid dreams. This result could be due to the effects of fasting on the brain, the researchers wrote. Or it could that the people who skipped meals did so because they were sleeping late in the morning, which allowed them to squeeze in extra REM sleep.

More general eating patterns might influence dreams, said Tore Nielsen, a psychologist who researches dreams at the University of Montreal and the co-author of the 2015 study. People who report binge-eating or emotional eating also reported more disturbed dreams in that survey, Nielsen told Live Science. (It's possible that the underlying emotions that drive these eating patterns also drive bizarre or scary dreams.)

Still, many people do believe that certain foods, particularly spicy foods or cheese, cause bad dreams, Nielsen and his colleagues found. Indeed, 11.5 percent of participants in that study said they thought their dreams were affected by eating specific foods. Some foods do contain nutrients that can theoretically affect sleep, the researchers wrote, so perhaps these participants were correct.

But, the researchers added, the foods could also be causing gastrointestinal upset that resulted in disturbed sleep and disturbed dreams. Or, the scientists wrote, it's possible that people simply attributed their random bad dreams to food because they already believed in the folklore that links the two.

At any rate, Burger King isn't the only commercial interest that has tried to lure consumers with the promise that a product will infiltrate their dreams. In 2005, the British Cheese Board produced a study claiming that cheese doesn't give people nightmares. Different kinds of cheese prompted different kinds of dreams, according to the study. Cheddar eaters, for example, enjoyed dreams of celebrities.

Like Burger King's, that study was never published in a peer-reviewed journal. Unfortunately for science, it also failed to investigate the Nightmare King's crowning ingredient, American cheese.

Editor's Note: This story was updated on Oct. 18 to include more thorough information about the Nightmare King study from Burger King's publicist, as well as information on the association between emotional eating patterns and dreams.