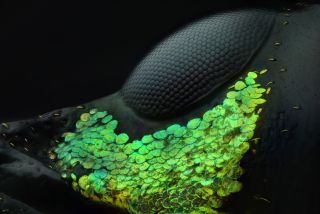 The annual contest, now in its 44th year, celebrates stunning images of objects too small to be seen without a microscope. This year, winning photographers turned their magnifying camera lenses toward such wee marvels as a spider embryo, filaments in a peacock feather and illuminated blood vessels in the oviduct of a mouse.

First prize went to photographer Yousef Al Habshi of Abu Dhabi, United Arab Emirates, for his spectacular image showing the pitch-black compound eye of an Asian red palm weevil (Metapocyrtus subquadrulifer). In the photo, the beetle's dark eye is ringed by tiny yellow hairs and an expanse of glowing scales in shades of brilliant green, which was captured by stacking dozens of images, Nikon representatives said in a statement released Oct. 11. [Photos: Peer at Glittering Insect Eyes and Glowing Barnacle Hairs in Prizewinning Photos]

Capturing close-up photos of a weevil's head is challenging, to say the least, as the insect's entire body typically measures less than 0.4 inches (11 millimeters). Al Habshi stacked 128 micrographs to achieve the remarkable color and texture details in his image, which balanced the deep black of the beetle's eye and skin with the brilliant green of the scales around it, he explained in the statement.

"Not all people appreciate small species, particularly insects," he said. "Through photomicrography we can find a whole new, beautiful world which hasn't been seen before."

A colorful fluorescent cluster of spore-producing structures in a fern earned the second place spot for Rogelio Moreno Gill, a photographer in Panama City, Panama; while Naperville, Illinois, photographer Saulius Gugis nabbed third place with a photo of a bubble-blowing spittlebug nymph huddled inside its bubble home on a leaf.

Other standout photos include a spider embryo, its baby legs wrapped tightly around its tiny body; the central region of a human retina, illuminated like a fireworks display; and the incredibly intricate, frond-like structures inside a single human teardrop.

"Every year, we continue to be astounded by the winning images," Nikon Instruments representative Eric Flem said in the statement. "Imaging and microscope technologies continue to develop and evolve to allow artists and scientists to capture scientific moments with remarkable clarity," Flem said.

You can see all of the winners, honorable mentions and images of distinction — 95 in all — on the Nikon Small World website.