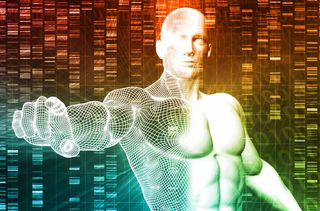 Are we all going to be replaced?

Stephen Hawking apparently thought so. In the grand tradition of famous physicists making claims about subjects beyond their scope of expertise, the great British theorist left behind a collection of essays in which he speculated about and predicted the human future. In one essay, published Oct. 14 in the Sunday Times, Hawking argued that humanity risks being replaced by genetically modified "superhumans."

Well-intentioned research designed to improve human health and human life, he wrote, will eventually be corrupted. People will start to modify humans to live longer, be smarter, or be more aggressive and dangerous. [9 Absolutely Evil Medical Experiments]

"Once such superhumans appear, there are going to be significant political problems with the unimproved humans, who won't be able to compete," Hawking wrote. "Presumably, they will die out, or become unimportant."

Was Hawking right to worry about this sort of dystopia?

The physicist framed the problem in startling terms. But he's not alone in worrying that humanity is wandering into dangerous territory as genetic technologies improve.

Right now, the gene editing available for humans almost exclusively treats severe medical problems. For incurable, deadly diseases, doctors have altered people's genes to prevent those diseases from progressing further. This has sometimes been successful, as Live Science has previously reported. There have also been early experiments in China into germline gene editing — making genetic changes that can be passed down from one generation to the next — in order to prevent parents from passing genetic diseases to their children.

Bioethicists have raised concerns about where all this is headed.

The most immediate concerns, though, aren't about superhumans. The first problem with gene therapy is that it's just not that well understood, according to the National Human Genome Research Institute (NHGRI). Researchers don't yet know all the possible side effects of gene editing, or the risk of those changes being passed from one generation to the next.

Relatedly, according to the NHGRI, "In germline gene transfer, the persons being affected by the procedure — those for whom the procedure is undertaken — do not yet exist. Thus, the potential beneficiaries are not in a position to consent to, or refuse, such a procedure."

However, if gene editing were to become widespread, there's a risk it would be available only to the wealthy, and that efforts to prevent genetic diseases could blur with efforts to create enhanced humans, according to the National Institutes of Health.

The University of Missouri Center for Health Ethics similarly published a document online raising the possibility that efforts to weed out genetic diseases could de facto lead to the eugenic eradication of disabled people from society. And, according to the Center, in a society where human beings are enhanced, previous "models" of human risk become obsolete, echoing Hawking's fear.

But the closer a bioethical argument gets to the world Hawking envisioned, the vaguer the predictions become — because the science is still a long way off from that point. And right now, this sort of conversation often amounts to confusing scaremongering, said Matthew Willmann a biologist and director of the Plant Transformation Facility at Cornell University.

"I was frustrated [to read what Hawking wrote] because, to me, if you want to scare people about a technology that has some amazingly positive benefits for humankind, you'd make predictions like that," he told Live Science. [10 Amazing Things Scientists Just Did with CRISPR]

It's theoretically possible that Hawking's world of superhumans could emerge, Willmann said.

"Could it happen? Yeah. But there's a lot going on to prevent that from happening," he said.

Scientific institutions and governments are developing strict ethical codes and laws that would regulate gene editing, he pointed out. And those laws would be incredibly difficult to circumvent without the world noticing.

In the TV show "Orphan Black," a cabal of scientists decide to edit and enhance a group of cloned babies — and all the scientists need is money and a willingness to do evil things.

But the reality, Willmann pointed out, is that genetics is too complicated and confusing for that to work.

"You can only do editing when you have information about how the genes work," he said.

In his research, he's able to create plants with specific genetic traits only by first creating lots of plants with damaged, deadly, or otherwise screwed-up genes. Over time, he and his colleagues figure out which genes do what and therefore how those genes need to be modified to get the results they want.

But that's only possible, he said, because, "as I often say, plants don't cry."

A similar project in human beings would take far longer, and be — if not unimaginable — difficult to pull off in a modern society.

So, was Hawking right to worry about a new species of superhumans replacing our own? It's hard to definitively say no. But it's probably not going to happen anytime soon, and there are more pressing ethical concerns in genetics to worry about in the meantime, Willmann said.