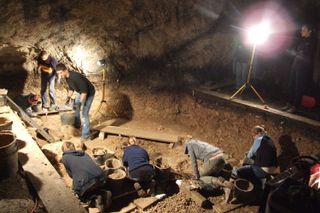 The Neanderthal's bones were found in Ciemna Cave, which researchers have been excavating for decades.
(Image: © Paweł Valde-Nowak)

One Neanderthal child had a very bad day about 115,000 years ago. The child died — that much is certain — and the bones were gulped down and digested by a giant, prehistoric bird, according to archaeologists in Poland.

Either way, it appears that the child's phalanges (finger bones) passed "through the digestive system of a large bird," Paweł Valde-Nowak, a professor of archaeology at Jagiellonian University in Kraków, Poland, said in a statement. "This is the first such known example from the ice age." [In Photos: Bones from a Denisovan-Neanderthal Hybrid]

The discovery of the Neanderthal child's finger bones is a big finding, especially because the bones, discovered in Ciemna Cave, are the oldest known human remains ever to be found in Poland.

Until now, the oldest known human remains in Poland were three Neanderthal molars from Stajnia Cave that dated to between 52,000 and 42,000 years ago. Neanderthals (Homo neanderthalensis) lived in Eurasia from about 300,000 to about 35,000 years ago and are modern humans' closest extinct relatives. (The date for the extinction of Neanderthals is up in the air. According to a 2006 study in the journal Nature, Neanderthals may have lived to about 24,000 years ago, although these individuals were likely among the last of their kind.)

An analysis of the newly analyzed finger bones revealed that the child was likely between the age of 5 and 7 when he or she died, Valde-Nowak said. The 0.4-inch-long (1 centimeter) bones themselves are porous, and dotted with dozens of strainer-like holes, he added.

But given their poor state of preservation, the bones are not suitable for DNA analysis, Valde-Nowak and his colleagues said.

"But we have no doubts that these are Neanderthal remains, because they come from a very deep layer of the cave, a few meters [yards] below the present surface," Valde-Nowak said. "This layer also contains typical stone tools used by the Neanderthal."

Moreover, it appears that the Neanderthals used the cave seasonally, he said. Researchers have been studying Ciemna Cave for decades, and while they found the child's bones (as well as a few ancient animal bones) there a few years ago, it wasn't until 2018 that a new analysis revealed that these bones belonged to a Neanderthal.

"This is a unique discovery," Valde-Nowak said. "Only single fragments of fossil bones belonging to relatives of modern man (Homo sapiens) have survived to our times in Poland." Researchers have also unearthed Neanderthal tools — such as knife scrapers, which could be used to cut and scrape — on the banks of Poland's Vistula River. All of these Neanderthal findings come from southern Poland, indicating that the region was advantageous for Neanderthals, unlike northern Poland, which was covered with a glacier during the last ice age.

The research, which is not yet published, is due out later this year in the Journal of Paleolithic Archaeology.