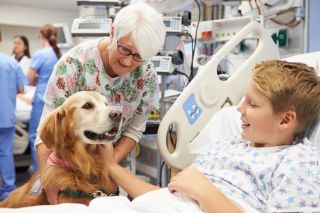 SAN FRANCISCO — Petting a therapy dog can help reduce stress and anxiety in kids who have cancer, but a visit from one of these furry friends can also spread dangerous germs to these vulnerable children.

But now, a new study suggests a way to make therapy dog visits safer for childhood cancer patients: Clean the dogs with antiseptic shampoo and wipes.

The study looked at children with cancer who interacted closely with dogs, by petting or hugging them. If the dogs hadn't been cleaned, the kids were six times more likely to become carriers of the superbug MRSA (methicillin-resistant Staphylococcus aureus), compared with children who didn't interact closely with the dogs, the study found. (A "carrier" of MRSA refers to someone who has the organism somewhere on his or her body, such as their skin, but it hasn't caused an infection.) [11 Ways Your Beloved Pet May Make You Sick]

Cleaning the dogs with a special shampoo, however, reduced the chances of the superbug spreading, the study found.

The findings were presented here at IDWeek, a meeting of several organizations focused on infectious diseases.

"We did see benefits throughout our study" for the children playing with the therapy dogs, lead study author Dr. Kathryn Dalton, a veterinarian and doctoral candidate at the Johns Hopkins University Bloomberg School of Public Health in Baltimore, said today (Oct. 5) during a news conference about the findings. For example, the children reported decreased stress, anxiety and pain levels after the therapy visit, Dalton said.

However, cancer patients who carry MRSA have a greater risk of developing a MRSA infection than healthy people do, because cancer treatment can weaken the immune system.

In addition, because the dogs visit numerous patients and often move throughout the hospital, or even between different hospitals, they can pick up MRSA from surfaces or interactions with patients and spread it around, the researchers said.

In the new study, the researchers analyzed information from 45 child and young-adult cancer patients (ages 2 to 20) and four therapy dogs. The study did not include children who already had a MRSA infection.

For seven therapy sessions, the dog handlers followed their typical procedures before and during the visit (meaning the dogs weren't treated with antibiotic cleaners). But for six visits, the dogs were cleaned with a shampoo containing the antiseptic chlorhexidine before the visit and with wipes containing chlorhexidine every 5 to 10 minutes during the visit. The children and dogs were tested for MRSA carriage before and after the therapy visits.

The study found that when the dogs were not cleaned with the antibiotic products, four cancer patients (15 percent) became MRSA carriers, as did three of the dogs (43 percent).

But when the dogs were cleaned, just one cancer patient (4.5 percent) became a MRSA carrier. This likely happened not because the child was playing with the dog but instead because of an interaction with another patient or surface during the therapy session, Dalton said.

The cleaning practice "essentially removed the dog from the equation" in terms of spreading MSRA, Dalton said.

Dalton added that the dogs enjoyed the intervention, because the wiping was "just like getting pet."

However, there is a potential concern that frequent use of the antiseptic could lead to the bacteria becoming more resistant to the cleaning. Because of this, the researchers are in the process of testing samples of the bacteria to look for genes that indicate resistance.

More studies are needed to see if any of the children who became MRSA carriers during the study ultimately develop a MRSA infection. And because the new study is the first of its kind, researchers should test the intervention at other hospitals and departments to confirm the findings.