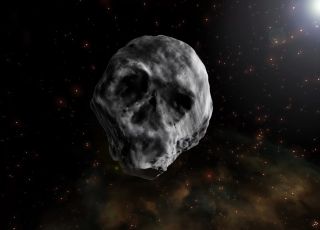 The "Halloween Asteroid" 2015 TB145, shown here in an artist’s illustration, is expected to whiz by Earth a little later than usual, swinging by on Nov. 11, 2018.
(Image: © JOSÉ ANTONIO PEÑAS/SINC)

Better late to the Halloween party than never: An asteroid shaped like a grinning skull is set to pass by Earth on Nov. 11.

Asteroid 2015 TB145 was first discovered in 2015, when it zipped within 301,986 miles (486,000 kilometers) of Earth right on Halloween. According to NASA's Jet Propulsion Laboratory small-body object database, the asteroid's next flyby will not be nearly so close; it will pass about 24 million miles (38 million km) from our planet. That's about a quarter of the distance from the Earth to the sun.

Scientists had the opportunity to snap some spooky images of 2015 TB 145 when it first passed the planet, in 2015. The pictures showed a mostly spherical rock with indentations that resembled gaping eye sockets and a nose hole, at least from some angles.

The asteroid is about 2,047 feet (625 meters) wide, according to a 2017 study, making it a relative pip-squeak, astronomically speaking. (By comparison, the asteroid thought to have wiped out the dinosaurs was about 6 miles, or 10 km, across.)

The skeletal rock didn't affect Earth on its 2015 flyby, and the asteroid won't have any effect on the planet during its more-distant November pass-by. However, researchers have found that the asteroid is not just spooky, but also special. According to NASA researchers, the asteroid's oblong orbit and its velocity suggest that it might be a dead comet, stripped of its icy debris tail by too many trips around the sun. Comet tails are tails of dust and gas that stream behind a comet due to solar radiation.

While the Halloween asteroid won't be coming very close to Earth on its flyby, there will be a few close shaves with other space rocks in the near future. According to Max-Planck-Institut für extraterrestrische Physik scientist Thomas G. Müller, an asteroid dubbed 1999 AN10 will pass 185,911 miles (299,196 km) from Earth on Aug. 7, 2027. On April 13, 2029, an asteroid named 99942 Apophis, after the Egyptian god of evil, will whiz by Earth at a distance of only 23,239 miles (37,400 km), about a tenth of the distance from the Earth to the moon.