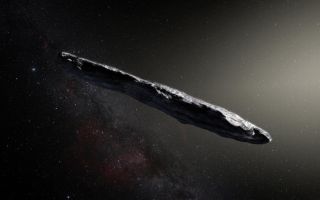 Ever since astronomers spotted 'Oumuamua, the first-ever object from beyond our solar system, it has offered more questions than answers: — What is it? Where did it come from? Why is it so darn weird?

But a team of scientists has announced they may have made major progress on that second question, narrowing down the object's origins to just four stars.

The research is based on data gathered in June that suggested 'Oumuamua wasn't just hurtling through space willy-nilly. Instead, it seemed like when the object was near the sun, it picked up a bit of extra speed, as if, like a comet, it carried something like ice that could turn to water vapor and propel the object forward a little faster than usual.

Accounting for that fact nudged 'Oumuamua's entry trajectory into our solar system a bit. (Scientists only spotted the object on its way out of the solar system, then had to retrace its path to track its origin.)

Then, the scientists consulted a huge batch of data produced by the European Space Agency's Gaia mission to pinpoint the precise locations of stars. That atlas is important not just to allow scientists to identify potential source solar systems, but also to calculate how nearby stars and their gravity tugged the object off-course along its journey.

Combining those two pieces of information, the team identified four possible stars that could have birthed 'Oumuamua: red dwarf HIP 3757, sunlike star HD 292249, and two other stars without such manageable nicknames as of yet.

Astronomers believe that 'Oumuamua (the name means "messenger from afar arriving first" in Hawaiian) must have come from a solar system with at least one large gas giant planet in order for it to have been kicked out and set off across the universe. As of yet, all four candidate stars are planet-less — but that could always change.

The new research is described in a paper posted Sept. 24 to the preprint site arXiv.org and has been accepted for publication in the Astrophysical Journal.