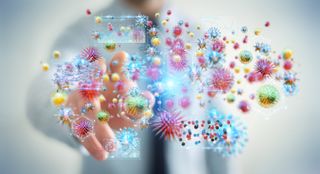 You are never alone: With every step you take, a bubble of particles follows.

Microbes, chemicals, fungi, microscopic animals and other little biological crumbs constantly move around us and form what's called an "exposome" — or everything we're exposed to in the moment.

Researchers recently conducted a personal-bubble census by using a small air-monitoring device. They found that one person's exposome could be vastly different from another's, even if they live close to one another. They reported their findings (Sept. 20) online in the journal Cell.

"Human health is influenced by two things: your DNA and the environment," senior author Michael Snyder, professor and chair of genetics at Stanford University, said in a statement. "People have measured things like air pollution on a broad scale, but no one has really measured biological and chemical exposures at a personal level." [Body Bugs: 5 Surprising Facts About Your Microbiome]

"No one really knows how vast the human exposome is or what kinds of things are in there," he added.

The researchers recruited 15 participants to wear a small device strapped to their arm wherever they went. Some wore it for a month, some for a week, and one — Snyder himself — wore it for two years.

The device acts like a vacuum, trapping particles directly from a person's surrounding. As participants traveled around, the device captured data from over 66 different locations.

The researchers then analyzed the DNA and RNA from the captured particles and did chemical profiling to identify what sorts of microbial and fungal guests the participants had been hosting. They created a database of over 40,000 species to cover the extent of environmental exposures they found — capturing moments participants spent with pets, around household chemicals and walking near flowers.

They found over 2,500 different species that surrounded the participants. And "it turns out, even at very close distances, we have very different exposure profiles or 'signatures,'" Snyder said.

In one portion of the study, four participants, including Snyder, wore the device for a month — but each participant lived in different region of the San Francisco Bay Area. One participant had high levels of "sludge bacteria" that are typically found in wastewater or sewage treatments, according to the statement. Snyder himself consistently had "fungal" particles around him, which he suspects could be due to the use of an environmentally friendly paint in his house, which lacks a certain substance that combats fungi, according to the statement.

Because Snyder wore the device for two years, he had the most data among the participants — his device recorded traces of his pet exposures and traces of eucalyptus trees in the spring, for example. One use of the device could be monitoring what a person is exposed to throughout the year to figure out what exactly someone is allergic to, according to the statement.

The researchers did find that sometimes our personal bubbles are occupied by similar particles. Traces of DEET, the insect repellant, and some carcinogens such as diethylene glycol (DEG) were frequently found around the participants, according to the statement.

Though the device picked up disease-causing microbes, it's difficult to differentiate between the dangerous ones and similar ones that aren't harmful, Snyder said. As for carcinogens, he said the device measures individual instances of exposure, not absolute levels that people have been exposed through across their lifetime.

But since these chemicals could fit through the holes of the filter, they could also potentially reach the lower respiratory tract and interact with the lungs, according to the paper.

By revealing more and more of our exposomes, Snyder wants to understand how all these little invisible particles influence our health. He also hopes to simplify the device such that "everyone can be out there measuring their own personal exposures — perhaps [with] something like an exposome-detecting smartwatch."