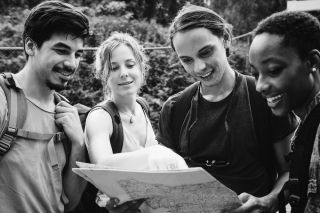 Scientists have discovered four main personality types, but put the brakes on your visions of a Harry Potter-style Sorting Hat. Chances are, you're just average.

Psychologists had already discovered that people tend to differ from one another according to five main personality traits, known as the Big Five: extraversion, conscientiousness, agreeableness, openness and neuroticism. The new study of the traits of more than 1.5 million people suggests that some of these traits tend to cluster together, creating predictable personality types.

There are four main clusters, researchers reported Monday (Sept. 17) in the journal Nature Human Behavior. People in the "average" cluster are, well, average on all five traits. They don't score very high or very low on any given trait. People in the "role model" cluster are pleasant to be around. They're low in neuroticism, high in conscientiousness, high in agreeableness and particularly extraverted and open to new experiences. [7 Things That Will Make You Happy]

Meanwhile, people in the "self-centered" cluster, the researchers found, are fairly disagreeable, not very conscientious and not very open to new experiences. The final cluster, the "reserved" cluster, is full of people who are low in neuroticism but also low in openness.

The researchers discovered the four clusters by using an algorithm to detect patterns in the data from 145,388 peoples' results on a personality test called the International Personality Item Pool. At first, the algorithm returned downright unbelievable results, including up to 20 different personality clusters. These made no sense to experts in the personality field and represented statistical artifacts, study co-author Martin Gerlach said.

After refining the calculations, the team ended up with the four clusters reported in their new study. To make sure these weren't also errors, the researchers tested the calculations on three other huge data sets from three other personality tests: 410,376 results from the Johnson-120 test; 575,380 results from the myPersonality-100 test; and 386,375 results from the BBC-44 test. All of these tests were taken in the United States and Great Britain, and all focused on the Big Five personality traits. The algorithm turned up the same four clusters in these data sets, too. [Most Neurotic & Creative States Revealed in US Personality Map]

The key thing to understand about the results, Gerlach said, is that people don't actually clearly fall into one cluster or another.

"What we find is not that these clusters are well-separated or that you belong exclusively to one of these four types," Gerlach, a postdoctoral fellow at Northwestern University, told Live Science. "This is not the case. People are located all over."

Metaphorically speaking, Gerlach said, the clusters are like lumps in pancake batter. There are particles of flour everywhere, but they just tend to be a little denser in certain areas. In other words, the personality types really fall along a continuum, he said.

That makes it hard to say how many people fall into one category or another. Almost by definition, most people are average, Gerlach said. They're close to the middle in terms of how outgoing they are, they're agreeable enough and pretty typical on conscientiousness. They're somewhat open to new experiences and right in the middle between laid back and high strung.

The "self-centered," "role model" and "reserved" categories are smaller than the "average" cluster, but otherwise can't really be ranked or quantified, Gerlach said.

This messy reality isn't as fun as things like the Myers-Briggs assessment, which purports to divide people into 16 separate personality types. Those types of tests are widely used, but they're based on fairly arbitrary dividing lines, Gerlach said.

"One problem is actually most people are located in the middle, so they are just average, so what does it mean to put them into [one category]?" he said.

Practically speaking, the new clusters suffer from the same problem, said Michael Ashton, a psychologist at Brock University in Ontario who studies personality but was not involved in the current research. Ashton and his colleague Kibeom Lee of the University of Calgary said that even a single cluster contains a wide variety of people.

"Consider two people who both belong to the "role model" type of this study," Ashton and Lee wrote in an email to Live Science. "One of these persons might be extremely self-disciplined and organized but only slightly above average in kindness and generosity, whereas the other person might be extremely kind and generous but only slightly above average in self-discipline and organization. These two people are quite different in personality, but they both get placed into the same type."

"Basically, if you classify people into personality types, you lose most of the information that you can get by considering their scores on a few main personality dimensions," they wrote.

People most likely can be seen to shift between clusters, as well. The researchers found that the "role model" category was weighted more toward people in the 40-plus age group, with relatively few people under the age of 21, indicating that maturity might nudge people into this cluster. Likewise, the "self-centered" cluster had relatively few people age 40 and up, but a relatively high proportion of people under the age of 21.

Gerlach and his colleagues argue that it's intriguing that the Big Five personality traits might, to some extent, move as a group rather than completely independently.

"One could ask the question, 'Why is this the case?'" he said. "So far, we do not have an understanding about that."

He and his team also want to find out whether the personality types have any impact on people's success in life. Personality traits have been shown to predict how well people do in life. A conscientious person, for example, tends to be successful at work, given their high levels of responsibility and organization.

"Now, the question is actually, 'Does a combination of traits perhaps lead to a better view of predicting these life outcomes?'" Gerlach said.