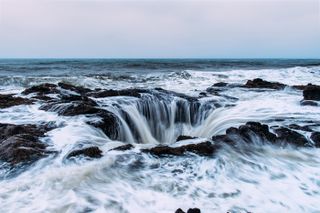 Where does all the water go that seems to get sucked into Thor's Well along the Oregon coast.
(Image: © Brad DeWald)

In a sumptuous new shot from Oregon, a natural feature called Thor's Well seems to drain the ocean straight into the underworld.

Posted on Reddit by Dallas resident Brad DeWald, the photograph shows a hole in the coastline that appears to drain and refill with the waves. In reality, the hole is about 20 feet (6 meters) deep, and it is often empty or completely covered by water. Just before and after high tide, though, Thor's Well puts on a splashy show as frothy waves shoot out of the chasm and then drain back down.

"You can get up really close to take the picture but have to be careful because everything is really wet, and there's always a chance of a rogue wave," DeWald told Live Science. [Images: One-of-a-Kind Places on Earth]

Indeed, a 2016 article about the feature in Oregon Live mentions three tourists hit by surprisingly large "sneaker" waves while staring at the well; they weren't swept away, but people have been lost along the Oregon coast when rogue waves rush onto the beach without warning. In 2016, a café owner in Coos Bay, Oregon, caught one of these terrifying waves on video.

Although the rugged Oregon coastline and rough seas are dangerous, there's nothing particularly deadly or even mysterious about Thor's Well itself. The hole is a top entrance to a cave worn into the basalt coastline; the cave's other entrance, at the bottom of the hole, leads toward the sea. At low tide, the waves slosh back and forth within the cave, visible to visitors peering down into the hole from the edge.

Around high tide, Thor's Well (named after the Norse god of thunder) fills from the bottom, occasionally shooting up spray as the waves slam against the rocks. Waves wash over the hole, too, seeming to drain down into it. The effect is a seemingly infinite cycle of draining and refilling.

Thor's Well isn't the only thunderous natural feature in the area. The hole sits in the Cape Perpetua Scenic Area in Oregon's Siuslaw National Forest. The volcanic rocks that make up the coastline create quite a palette upon which waves can play. Near Thor's Well sits another oceanside rock fracture. Spouting Horn, as it's called, funnels waves into a narrow rock fracture, spouting ocean water and spray high into the air. Slightly up the coast is a narrow channel called Devil's Churn, another spot where waves rocket high into the air as they smash against the rugged coastline.

Cape Perpetua is also known for its calmer features, particularly the tide pools exposed along the shore at low tide.