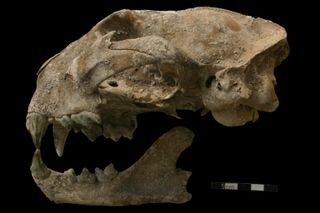 This puma skull was buried alongside a young Maya woman who sat cross-legged in her tomb in the 5th Century.
(Image: © N. Sugiyama)

A tomb in the ancient Maya city of Copán, in Honduras, holds the skeleton of a young woman who was cross-legged, surrounded by large animals. The bones of two deer and a crocodile lay alongside her. And most impressive: A complete puma skeleton was also found in the tomb, apparently slaughtered as part of the burial ritual. They'd all been there since the year A.D. 435, early in Maya history.

Now, researchers say the puma skeleton may have been domesticated, according to a paper published today (Sept. 12) in the journal PLOS One that describes the cross-legged woman's tomb. That ancient puma was part of a vast scheme of big-cat domestication, the researchers wrote.

"Encoded into the bones of jaguars and pumas at the Maya site of Copán was evidence of both captivity and of expansive trade networks," Nawa Sugiyama, an archaeologist at George Mason University in Virginia, and lead author of the study, said in a statement.

It's not uncommon for archaeologists to find the remains of big cats and other animals in Mesoamerican cities. At one site alongside a sacrificial altar in Copán, there were so many mixed-up remains of big cats, packed so tightly, that excavators took to calling them "jaguar stew," the researchers wrote in the study.

But those animals, buried as part of rituals performed in the city, have revealed new insights about life in Copán. Though people living in the Americas in that period were known to only have domesticated dogs and turkeys, chemical analysis of the big cats and other animals found in the city reveal that they, too, were kept and raised in captivity, and not merely hunted from local game grounds. [Prince's Tomb: Images from a Mayan Excavation]

The first evidence of large captive animal populations at Copán, the researchers wrote, is that the surrounding wilderness simply wasn't big or rich enough to support all the big cats found in these sites. And careful analysis of the bones suggests that at least some of the animals weren't living in the wild at all — meaning that early Mesoamericans kept and traded big cats and other animals far earlier than archaeologists realized.

Animals including jaguars and pumas, but also deer and birds, were likely kept in pens and traded around the Copán valley, the researchers found. That means there was a significant animal trade in South American more than 1,000 years before Moctezuma, ruler of Technochitlan, kept a famous zoo of sacrificial animals.

The evidence for domestication was revealed in the bones of the jaguar, puma and other felids found around Copán, which were often were rich in C4, a carbon-containing molecule common in agricultural plants like maize, but not wild plants. That means those big cats were likely eating captive prey fed human food — meaning they themselves were likely kept in captivity, the researchers wrote. However, other bones found at the same site were rich in C3, a molecule common in wild plants in the region, suggesting they ate a wild diet. That means, the researchers wrote, that the people of Copán likely kept big cats in captivity and slaughtered them. But they would supplement those slaughters with cats killed in wild hunts.

Studies of pelts, deer and other animal remains found around Copán also revealed oxygen isotopes, or versions of oxygen with different numbers of neutrons, that probably didn't come from the local area. Likely, the researchers wrote, the people of Copán were keeping not just big cats in captivity but a whole range of animals, and trading their furs, skins and other byproducts far and wide.