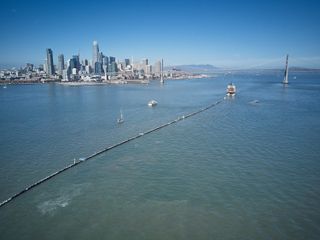 A team of engineers and scientists aims to clean up the several tons of ocean trash called the Great Pacific Garbage Patch. The plan? A behemoth noodle of sorts. The team hopes to use a 2,000-foot-long (600 meters) floating cylindrical boom with an impenetrable screen hanging from the bottom to sieve out bits of the trash.

Several experts, however, question the efficiency and practicality of the garbage-patch-cleanup plan. Even so, on Saturday (Sept. 8), the team launched the $20 million device, called System 001, from San Francisco Bay. It will get towed 300 to 400 miles (480 to 640 kilometers) offshore for a two-week test run before continuing its journey to the mid-Pacific Ocean.

System 001 was developed by a team of scientists and engineers at The Ocean Cleanup, a nonprofit dedicated to creating technology that removes plastic from the oceans. The organization's founder, Boyan Slat, is a 24-year-old Dutch inventor who started the organization in the Netherlands when he was 18 years old. [Top 10 Craziest Environmental Ideas]

"Today's launch is an important milestone, but the real celebration will come once the first plastic returns to shore," Slat said in a statement. "For 60 years, mankind has been putting plastic into the oceans; from that day onwards, we're taking it back out again."

Slat's organization plans to create and launch many more devices like System 001 in coming years. The organization estimates that deploying several dozens of these systems over a period of five years will lead to a 50 percent reduction in waste  the Pacific garbage patch.

But many experts are skeptical about the plan and question whether it will work at all.

One of the things the experts are concerned about is how the system will avoid catching sea life.

"There's worry that you can't remove the plastic without removing marine life at the same time," George Leonard, chief scientist at the Ocean Conservancy told The New York Times. "We know from the fishing industry if you put any sort of structure in the open ocean, it acts as a fish-aggregating device."

The system is designed to allow sea life to go under the impenetrable screen without harm or risk of entanglement, according to the Ocean Cleanup's website. The site also states that an independent agency, CSA Ocean Sciences, conducted an environmental impact assessment for the system and found no major risks to the environment.

Some oceanographers also wonder whether the system can hold together in the rough weather of the Pacific. And intense sun and violent wave action might cause the device, which is made of plastic, to degrade and contribute to the problem it was designed to clean up.

"I sort of wonder what kinds of microplastics this thing is going to be generating on its own, assuming that it's even functioning," Kara Lavender Law, an oceanographer at the Sea Education Association, told Wired. "If it's shedding nano-size particles and then gets smashed into 200-meter-long [660 feet] pieces, you're really covering the whole size range there."

According to the Ocean Cleanup website, the system was thoroughly tested and is designed to withstand forces from even the strongest, once-in-a-century storm.

But the biggest concern might be whether the system will even make a dent in cleaning up the plastic waste in the ocean. The device is designed to float on the surface, with the screen hanging vertically in the water column as anchors on either end of the float hold that object in a horseshoe shape. As waves and currents move toward the device, the net should catch pieces of trash and the floating boom should stop the trash from getting pushed over the net.

But what will the system pick up? "The ocean's surface is simply not where [the plastic is] at," said Marcus Eriksen, an environmental scientist and co-founder of the 5 Gyres Institute, a nonprofit dedicated to finding solutions to plastic pollution. "There isn't a need for at-sea cleanup," Eriksen told Live Science.

Eriksen and his colleagues performed their own assessment of the amount of trash in the Pacific Ocean, and published their findings in 2014 in the journal PLOS ONE. They found that while ocean currents and winds gather trash together in a general area, it's not a giant float like people might imagine, and there was far less plastic than previously estimated. Instead, a lot of the trash falls apart, sinks to the bottom and gets eaten. Eriksen described the area more like "a smog of microplastic particles."

Eriksen said the Ocean Cleanup's device is an ineffective solution because it's focused on a such small part of the problem and doesn't begin to tackle the source of plastic pollution. Instead, he said, people should focus on stopping the trash from making it to the ocean in the first place. In other words, look to the rivers. "Everyone realizes it's going to take an upstream fix," he said. "It's about prevention."

As an acquaintance of Slat's, Eriksen said he thinks the young executive has good intentions but feels obligated to deliver a product to his investors. (The Ocean Cleanup has multiple prominent investors, including Marc Benioff, the co-CEO of Salesforce.com, and Peter Thiel, the co-founder of PayPal, the Times reported.)

In 2015 and 2016, The Ocean Cleanup toured the Pacific Ocean by air and sea to collect data on how much trash was out there. They concluded that the Great Pacific Garbage Patch was up to 16 times more dense with plastic than previously estimated. The research team, which included 15 authors who worked for The Ocean Cleanup and only one who didn't, published their results in March 2018 in the journal Scientific Reports.

"For the last 10 years, we've worked really hard to undo this Texas-sized-island [of trash] myth and get the public looking upstream," Eriksen said. But The Ocean Cleanup has largely dismissed that approach and instead keeps their focus on the garbage patch as the primary source of the problem, Eriksen said.

"While the rest of the NGOs [non-governmental organizations] use science to drive their work, Ocean Cleanup uses their business to drive science, and that creates bias." Eriksen said.

Live Science reached out to The Ocean Cleanup for comment but didn't receive a response in time for publication.

"It's frustrating," Eriksen said. "There's an opportunity that is lost on this insistence to make good on a promise."