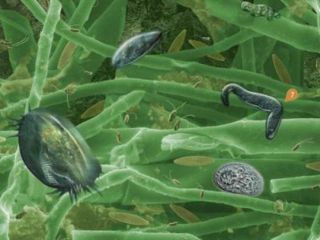 A visualization of organisms in a stream biofilm community.
(Image: © Andrew Dopheide and Gillian Lewis)

Pharmaceuticals that make their way into rivers are threatening the health of waterways. A new study found that an antihistamine, taken to relieve allergy symptoms in humans, hurts patches of slimy biofilm that are vital to the health of streams.

Just as it dries up runny noses, this antihistamine can dry up slimy rocks, albeit by a different mechanism, said Emma Rosi-Marshall, a researcher at the Cary Institute of Ecosystem Studies in Millbrook, N.Y., who looked at the effects of the chemical on river environments in a new study.

These biofilms, which most people know as the slippery coating on river rocks, recycle nutrients and provide food for the organisms at the base of the stream's ecosystem, Rosi-Marshall told LiveScience in an email.

But the antihistamine diphenhydramine, the active ingredient in Benadryl, reduced photosynthesis in these slimy patches by 99 percent, according to the study, published recently in the journal Ecological Applications. (Photosynthesis is the process by which algae and plants harness the sun's energy to produce sugars.)

The drug, found in rivers in New York and throughout the country, may also change the makeup of the bacterial community in the river. The study found that at a certain concentration, diphenhydramine increases the number of bacterial groups known to degrade toxic compounds, while decreasing the number of bacterial groups that digest chemicals made by plants and algae, according to the study.

These toxin-degrading microbes can apparently tolerate the presence of the drug, although it's unclear if they are breaking it down. Regardless, their increased abundance isn't a good sign for the stream's ecosystem, since they don't contribute much to biofilms. The decrease in the number of plant-digesting bacteria is concerning, however, since they are vital to the function of biofilms, researchers wrote in the study.

While the results of the study are preliminary, they suggest that concentrations of this drug found in nature could be having unforeseen effects — and this is just one of many drugs found in American rivers, Rosi-Marshall said.