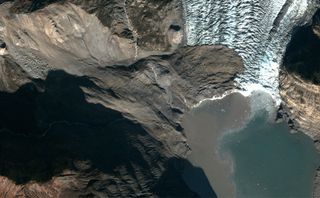 A massive landslide and tsunami that denuded the slopes of an Alaskan fjord could reveal warning signs that could help predict future disasters.

In a new paper, researchers described the geological fingerprints of the tsunami, which tore through Taan Fjord on Oct.17, 2015, at an estimated 100 mph (162 km/h). Using satellite imagery and field-based measurements, the team discovered that the slope was displaying signs of instability for at least two decades before it failed.

The "geologic evidence can help [us] understand past occurrences of similar events and might provide forewarning," the researchers wrote Thursday (Sept. 6) in the journal Scientific Reports. [The 11 Deadliest Natural Disasters in History]

Taan Fjord sits in Wrangell-St. Elias National Park and Preserve in southeastern Alaska. The rugged landscape is dotted with glaciers, including the Tyndall Glacier, which used to fill the entirety of Taan Fjord. Between 1961 and 1991, however, the glacier retreated 10.5 miles (17 kilometers) to the end of the fjord.

As glaciers retreat and permafrost melts, the rocky hillsides once supported by all that ice become unstable, wrote the team of researchers led by the University of Washington Tacoma's Dan Shugar and environmental nonprofit Ground Truth Trekking's Bretwood Higman. The situation is made worse by Alaska's restive nature; minor earthquakes regularly jolt the fjord walls.

Those factors may explain what happened in 2015, when an enormous chunk of hillside in front of the Tyndall Glacier suddenly failed. Fortunately, no human eye was around to witness the catastrophe, which spawned seismic waves equivalent to a magnitude-4.9 earthquake. Roughly 180 million tons of rock and dirt crashed toward the fjord, about one-third of the material landing on the glacier itself and the other two-thirds hitting the water. The resulting tsunami traveled 633 feet (193 meters) up the opposite side of the fjord; down-fjord, it reached 328 feet (100 m) in many places. After the wave of debris and water hit, hillsides that had once been covered with 32-foot (10 m) trees were stripped entirely bare.

It's unknown what triggered the final slope failure, the researchers wrote. About 2 minutes before the tsunami, the seismic waves from a magnitude-4.1 earthquake that hit more than 300 miles (500 km) away reached the fjord. The shaking wouldn't have been much, nor would it have been unusual for the region, the authors wrote, but it might have been enough. The previous months had also been unusually wet, which could have further destabilized the slope.

Whatever the reason that the slope failed at that moment, the landslide was inevitable, the researchers wrote. Satellite imagery revealed that the slope had been slumping since 1996, and depressed areas called grabens — created as the surface of the hillside stretched downward — had been visible from above since 1995. For two decades, the researchers found, the signs of a failing slope were apparent from satellite data.

The deposits that the tsunami left behind were unique, unlike those left by other modern tsunamis, the researchers found. These deposits occurred in three distinct layers, one consisting of fine sands, one made up of cobble-size rocks between about two and ten inches (5 to 25 cm) in diameter and boulders, and a final layer made of a mixture of everything from sand to boulders 16 feet (5 m) in diameter.

Seeing those patterns in a modern, well-documented landslide tsunami provides new clues about what to look for in the geological record when searching for ancient tsunamis, the researchers wrote. The findings also hint at ways to monitor unstable hillsides as climate change continues to force the retreat of the glaciers. Taan Fjord is remote, but the Tidal Fjord in tourist-heavy Glacier Bay, Alaska, saw a landslide in June 2016. Fortunately, the debris from that event didn't reach the water, avoiding a tsunami. In Rink Fjord in Greenland in 2017, a landslide tsunami had a far more tragic outcome: Four people died.

"More such landslides are likely to occur as mountain glaciers continue to shrink and alpine permafrost thaws," the researchers wrote.

Editor's note: This article has been updated to correct the amount of rock and dirt that moved during the landslide. It was 180 million tons, not 180 billion.