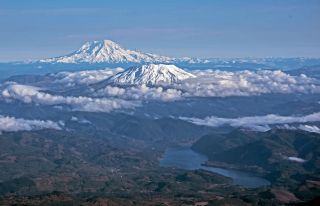 A new study may explain why Mount St. Helens (foreground) is so out of line with other young, active volcanoes in the Cascades range, such as Mount Rainier (background). An ancient scar from past tectonic collisions sits under Mount St. Helens and may act as a conduit for deeply-buried magma.
(Image: © Shutterstock)

Mount St. Helens is out of line. The volcano, part of the Cascades range in Washington state, sits about 40 miles (64 kilometers) west of other young volcanoes in the region, like Mount Adams and Mount Rainier.

Now, researchers have figured out why: Deep in the Earth's crust, a plug of cooled igneous, or volcanic, rock keeps magma from surfacing between Mount St. Helens and the rest of the volcanic arc. Meanwhile, the crust under the Mount St. Helens consists of an ancient scar caused by two continental plates slamming together.

The scar is "almost like a soda straw, which is allowing these deeper magmas to preferentially ascend to the surface," said Paul Bedrosian, a geophysicist at the U.S. Geological Survey (USGS) in Lakewood, Colorado, and a co-author of a new study on the region, published Monday (Sept. 3) in the journal Nature Geosciences. [The 11 Biggest Volcanic Eruptions in History]

Mount St. Helens is weird not just because of its westerly location, but also because it erupts thicker, stickier magmas than other Cascades volcanoes and because it's the most restless mountain of the bunch, Bedrosian told Live Science.

To figure out why, Bedrosian and his fellow USGS scientist Jared Peacock teamed up with researchers at Oregon State University and the University of Canterbury in New Zealand. The scientists used a method called magnetotellurics to plumb the crust beneath the region around Mount St. Helens, Mount Rainier and Mount Adams. In this method, scientists measure the electrical conductance of rocks deep below the surface. Different rocks have different conductance, so these measurements reveal what types of rocks lurk out of sight. The researchers deployed around 150 instruments over two years to take the measurements, Bedrosian told Live Science. The investigators then used the measurements to create a 3D map of the crust.

In this map, they found "cuts and bruises and scars" left behind from the ongoing collision of the offshore Juan de Fuca plate with the North American plate. Right under Mount St. Helens, Bedrosian said, the scientists discovered what's known as metasedimentary rock, detectable because it conducts electricity very well. This type of rock started out as seafloor sediments and was then transformed under pressure when its portion of the Juan de Fuca plate slipped under the North American plate about 40 million or 50 million years ago.

The geometry of this metasedimentary rock provides an easy path by which magma can slip toward the surface, Bedrosian said.

Meanwhile, east of Mount St. Helens and west of the rest of the Cascadian volcanoes is a relatively volcanic-vent-free region. The crust there was marked by a big chunk of rock 10,000 times less electrically conductive than the rock under Mount St. Helens. Researchers dubbed this feature the "Spirit Lake Batholith," a mass of cooled igneous rock that starts not far below the Earth's surface and penetrates 10 miles (16 km) deep.

The batholith, which covers an area 35 times the size of Manhattan (772 square miles or 2,000 square km), essentially blocks deep magmas that might otherwise rise to the surface. That keeps the 40-mile stretch between Mount St. Helens and the other volcanoes quiet, and the batholith helps explain why Mount St. Helens popped up where it did, Bedrosian said.

Mount St. Helens last burped ash in an eruptive episode between 2004 and 2008, according to the Smithsonian Institution's Global Volcanism Program. The mountain is most famous for its devastating 1980 eruption, which killed 57 people.

"Worldwide, there are volcanoes in quite a number of locations that aren't easily explained," Bedrosian said. "There are also areas where we think we should have volcanoes but we don't really see them."