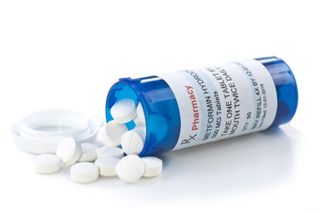 A commonly prescribed drug for treating type 2 diabetes has the risk of a new and highly unpleasant side effect.
(Image: © Shutterstock)

People with type 2 diabetes who take a certain class of drugs have a very troubling side effect to worry about: The drugs may increase the risk of the genitals becoming infected with "flesh-eating" bacteria.

On Wednesday (Aug. 29), the U.S. Food and Drug Administration (FDA) issued a warning about sodium-glucose cotransporter-2 (SGLT2) inhibitors, which are commonly prescribed medications for treating type 2 diabetes. Over a five-year period, the drugs have been linked to a dozen rare cases of genital infections that cause the skin to die, a condition called necrotizing fasciitis. All 12 patients who developed the infection were hospitalized, and one died, according to the FDA.

More specifically, the drugs have been linked to cases of a flesh-eating bacteria infection that affects the perineum, or the area of skin between the anus and the vulva or scrotum. When this type of infection affects this part of the body, it's referred to as Fournier's gangrene, a rare but potentially fatal condition, according to the Mayo Clinic.

The infection is more common in men than women, and it can spread to other parts of the body, Dr. Amesh Adalja, a senior scholar at the Johns Hopkins University Center for Health Security, told SELF. "It can rapidly progress and involve the entire genital area and even the abdominal wall," he said. [5 Ways Skin Can Signal Health Problems]

There have been enough instances of these severe infections that the FDA now requires all SGLT2 inhibitors to include a warning about this risk in their prescribing information. Medications in this class include canagliflozin, dapagliflozin, empagliflozin and ertugliflozin. The drugs are available as single-ingredient medications or in combinations, such as with metformin, the FDA said.

How do the infections happen?

So, how can this lead to infections? Anywhere there is higher blood sugar, there's an increased chance of bacterial infection, Jamie Alan, an assistant professor of pharmacology and toxicology at Michigan State University, told SELF. "We have bacteria all over us, and one of the foods that bacteria likes is [sugar]," Alan said. She explained that eliminating more sugar through urine means there is more of bacteria's favorite food in the genital area, so this spot becomes a rather inviting environment for them.

The bacteria become a problem only if there is an entry point to infect, such as a small cut from shaving or a skin ulcer near the genitals. And that's exactly what happens, Adalja told SELF. The infections are serious and often require many surgeries to remove all the infected tissues, Adalja said. (All 12 patients described in the FDA warning required surgery.)

The FDA warning instructs patients taking the drugs to seek medical attention right away if they experience any signs of swelling, itching or irritation in the genitals area or have a fever above 100.4 degrees Fahrenheit (38 degrees Celsius) and generally don't feel well. The bacteria that cause necrotizing fasciitis can spread quickly, so it's important to seek treatment immediately.

But the infections are rare, and it's unwise to stop taking medications without talking it over with a doctor, Alan told SELF. There are other options for treating type 2 diabetes, she said, but practicing good hygiene can help minimize the risk of necrotizing fasciitis.