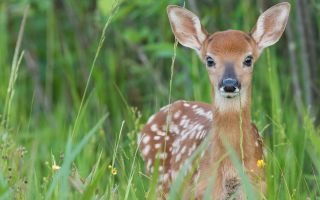 Deer emerged as a top photo search in some states. But snakes and spiders were the most popular wildlife image searches across the country.
(Image: © Shutterstock)

It depends on where people live, according to new data from Google showing the top image searches for bugs and wild animals, state by state in the U.S. [10 Easy Ways to Help Wildlife, Every Day]

In some states, people searched for images of animals that were native to that region: Orcas were at the top of the list in Washington, and Washington's Puget Sound is home to a group of orcas known as the Southern Resident Killer Whale population, according to the U.S. Fish and Wildlife Service (FWS). Wolves were popular in several states, turning up as the most-searched animal in Montana, North Carolina, North Dakota, South Dakota, Utah and Louisiana.

Some states leaned toward photos of reptiles: People in the District of Columbia searched for salamanders, Arizona residents opted for Gila monsters and Hawaiians Googled turtles. Snake species were the No. 1 choice in seven states, with copperheads coming in first in Tennessee, South Carolina, Missouri and Georgia — all of which are home to the muscular viper.

The fisher cat, a small carnivorous mammal in the same family as martens, weasels and wolverines, was another popular selection, topping image searches in six states.

But perhaps the most puzzling results are from Oklahoma, where the top search was for meerkats. These endearing, burrowing mammals are not found anywhere in North America, and are native only to deserts in Botswana, Namibia, southwestern Angola, and South Africa, according to the International Union for Conservation of Nature (IUCN).

As for insects and spiders, Google searches were dominated by spiders, with 23 states having some type of spider as their top image search. The most popular by far was the brown recluse, showing up as the No. 1 search in seven states. Top searches in other states focused on stink bugs (Wisconsin, New Hampshire, Michigan, Illinois and Connecticut); praying mantises (the District of Columbia and Iowa); and luna moths (Alabama).

Google released its findings to commemorate the 50th anniversary of the National Trail System, according to a statement. The passage of the National Trail System Act in 1968 launched a federal initiative to promote, preserve and maintain trails in urban and rural settings, to provide people with opportunities for outdoor recreation and to encourage people to interact with the natural world, according to the National Park Service (NPS).