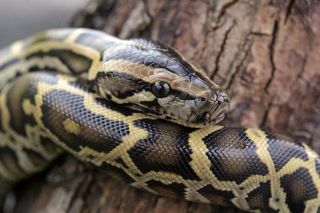 New hybrid pythons discovered in southern Florida could be stronger and more adaptable to their environment than their nonhybrid relatives.

The curious pythons are, genetically speaking, mostly Burmese pythons (Python bivittatus). These snakes were first brought to Florida as exotic pets, and were introduced into the state's wilderness in the 1980s. Since then, Burmese pythons have increased in numbers to tens of thousands and have waged war against small mammals.

But according to a recent study, published Aug. 19 in the journal Ecology and Evolution, some of these Burmese pythons carry genetic traces from another, distinct species, making them robust hybrids.

A group of researchers discovered the hybrids when analyzing tail tissue from 426 Burmese pythons collected between 2001 and 2012 in southern Florida, including in the Everglades. The scientists found that 13 of the snakes had genetic signatures from the Indian python (Python molurus) in their mitochondrial DNA, which is passed from mother to child. [Photos: Giant Pythons Invade Everglades]

But this doesn't mean that there's a new, dangerous hybrid species suddenly threatening Florida, according to The Guardian. Rather, the researchers think that the cross-breeding happened long ago, before the pythons began to multiply and expand in Florida.

A combination of robust genes from both snake species could create pythons with "hybrid vigor" that are capable of living in a wide range of environments and are better-adapted to climate change, according to the study. Indian pythons typically live in higher and drier areas, according to The Guardian, while Burmese pythons like water, preferring to dwell in riverine forests and flooded grasslands.

"Overall, the most concerning fact is that the Burmese python population is large and likely growing, and that it is detrimental to the native animal populations," lead study author Margaret Hunter, a research geneticist at the U.S. Geological Survey, told ABC News.

Both snakes are invasive species in the state.

Burmese pythons are native to Southeast Asia and can grow to be over 23 feet (7 meters) and weigh up to 200 lbs. (91 kilograms), according to National Geographic. These snakes are the "large snake of choice among reptile owners," National Geographic said.

Indian pythons are smaller and faster than Burmese pythons, The Guardian reported. They're native to India, Sri Lanka, Pakistan and Nepal, according to the Maryland Zoo.