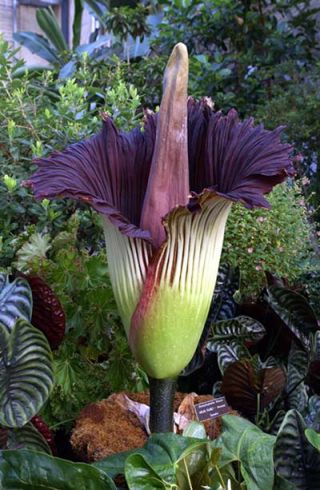 A rare behemoth flower — dubbed the "corpse flower" for its rotting-meat smell — is set to bloom at Western Illinois University this week. It's one of a small group of these flowers that have bloomed in cultivation since the 1880s.

"The Titans in the WIU Botany Greenhouse will only get about half that in size," said Jeff Hillyer, greenhouse gardner at WIU.

The flower, whose scientific name is Amorphophallus titanum and is also know as Titan Arum, is native to the equatorial rainforests of central Sumatra in western Indonesia.

The seeds for the Western Illinois University plant were collected in 1993 by James Symon in Sumatra while filming for Sir David Attenborough's BBC documentary "The Private Life of Plants." The plants that WIU has grown from those seeds are among the first generation of plants cultivated in the United States. (That means they are essentially from the 1930s.)

"When one of these plants bloomed at the University of Wisconsin-Madison, more than 30,000 people viewed its splendor. It's extremely exciting that Western's greenhouse is housing the first generation of this flower grown in the U.S.," Hillyer said. "It is pretty cool to have it in all three conditions: dormant, vegetative growth and flowering, at the same time for all to see. This is a wonderful opportunity for our students to work with a rare species."

For most of its life, the corpse flower grows vegetatively, only producing a single, umbrella-like leaf, Hillyer explained.

The bloom (or inflorescence) of the flower is actually composed of thousands of flowers. The flower's nickname comes from the odor of the bloom, which smells like rotting meat.

In its native environment, the Titan Arum is pollinated by carrion beetles and flesh flies, which are attracted to the horrendous odor. The flower is a member of the Araceae family that includes plants such as Jack-in-the-Pulpit, Calla Lilly and Philodendron.

Though corpse flowers are heavyweights, they don't reach the size of another hefty type of flower, called rafflesias, whose petal-to-petal girth can reach 3 feet (just under a meter) and that can weigh 15 pounds (6.8 kilograms).