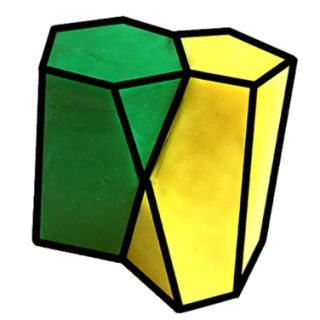 Our world is made up of elegant shapes — there's the square, the rectangle, the sphere, the prism and many more. But sometimes, these shapes don't quite fit nature's game board.

Sometimes, you also need a "scutoid."

This shape — new to math, not to nature — is the form that a group of cells in the body takes in order to pack tightly and efficiently into the tricky curves of organs, scientists reported in a new paper, published July 27 in the journal Nature Communications.

The cells, called epithelial cells, line most surfaces in an animal's body, including the skin, other organs and blood vessels. These cells are typically described in biology books as column-like or having some sort of prism shape — two parallel faces and a certain number of parallelogram sides. Sometimes, they can also be described as a bottle-like form of a prism called a "frustum." [Amazing Images: Heart Shapes in Nature]

But by using computational modeling, the group of scientists found that epithelial cells can take a new shape, previously unrecognized by mathematics, when they have to pack together tightly to form the bending parts of organs. The scientists named the shape "scutoid" after a triangle-shaped part of a beetle's thorax called the scutellum. The scutoid itself looks like a bent prism with five slightly slanted sides and one corner cut off.

The researchers later confirmed the presence of the new shape in the epithelial cells of fruit-fly salivary glands and embryos.

By packing into scutoids, the cells minimize their energy use and maximize how stable they are when they pack, the researchers said in a statement. And uncovering such elegant mathematics of nature can provide engineers with new models to inspire delicate human-made tissues.

"If you are looking to grow artificial organs, this discovery could help you build a scaffold to encourage this kind of cell packing, accurately mimicking nature's way to efficiently develop tissues," study co-senior author Javier Buceta, an associate professor in the Department of Bioengineering at Lehigh University in Pennsylvania, said in the statement.

The results of the study surprised the researchers. "One does not normally have the opportunity to name a new shape," Buceta said in the statement.