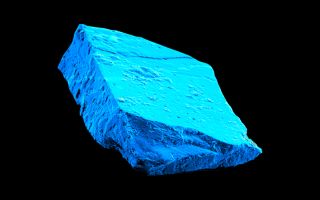 Before our planet took shape billions of years ago, the sun was a hyperactive hot mess. As a young star, it erupted frequently, spewing enormous quantities of high-energy particles.

That tempestuous past was preserved in microscopic, pale-blue crystals locked in ancient meteorites, a new analysis reveals.

The striking blue crystals, known as hibonite, are made of one of the first minerals to form in the solar system. These tiny grains are too small to see with the naked eye; the largest are only a little bigger than the width of a human hair. But these minuscule specks are packed with valuable information about the sun, such as traces of chemical activity from the early period before any of the planets formed, researchers reported in a new study. [Rainbow Album: The Many Colors of the Sun]

Stars are born in dense, cold clouds of dust and gas. As gravity draws the denser parts of the cloud inward, they generate heat and pull more material toward the center; this heated gas and dust eventually become the core of a newborn star, according to NASA.

Our sun is dynamic, roiling with solar flares, high-speed solar winds and coronal mass ejections that spew plasma into space. But observations of stellar birth and formation have found that stars are even wilder when they're young and still growing, study co-author Philipp Heck, an associate curator of meteoritics and polar studies at The Field Museum in Chicago, told Live Science in an email.

"A young star is more active in that it has more frequent and violent eruptions that launch particles and radiation into its surroundings," Heck said.

Once a star's core temperature becomes hot enough to ignite fusion, the star stops growing and begins a relatively quiet phase — the longest phase of its life.

"This is the phase the sun is currently in," Heck said.

Stars the size of our sun — an average star, birthed about 4.6 billion years ago — take about 50 million years to settle down into their "mature" state. And once a star leaves its unruly youthful phase behind, it can look forward to a life span of up to tens of billions of years, according to NASA.

To see if our sun's youth was as energetic as that of similar stars, scientists inspected samples from pieces of the Murchison meteorite in The Field Museum's collection. This rocky meteorite exploded in the sky over Murchison, Australia, in 1969, and scientists who previously examined its fragments found dust grains shaped by supernovas that predate our sun, according to Museums Victoria.

This time, the researchers were looking for evidence that was a little more recent — after the sun's birth, but before it took on the more sedate form we know today. Hibonite was around before any other minerals in the solar system, so hibonite grains in the Murchison meteorite seemed like a good place to look for evidence of how active the young sun may have been, Heck told Live Science in an email.

The researchers blasted the tiny hibonite crystals with lasers and, in doing so, released neon and helium that had been trapped inside the crystals for billions of years. The concentration and ratio of isotopes, or variations, of these noble gases, was a smoking gun for the researchers: It showed that an energetic young sun irradiated the hibonite crystals billions of years ago, as they spun in the cloud of gas and dust around the still-growing star. When the sun's high-energy particles struck the blue crystals, they split calcium and aluminum atoms to make certain isotopes of neon and helium, the study authors reported.

"These isotope ratios serve as characteristic 'fingerprints' of irradiation with energetic particles from the early active sun," Heck said.

The findings were published online today (July 30) in the journal Nature Astronomy.