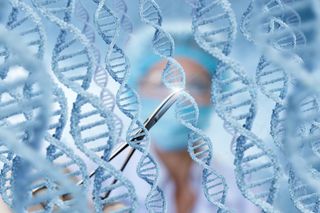 The idea of using gene-editing technology to tweak a baby's DNA before birth has been the topic of fierce debate for years. But now, most Americans say using this technology on embryos would be acceptable under certain circumstances, according to a new poll.

The poll, from the Pew Research Center, found that 76 percent of Americans say that altering an unborn baby's genetic characteristics in order to treat a serious disease the baby would have at birth is an appropriate use of gene-editing technology.

In addition, 60 percent of Americans support the use of gene-editing technology in unborn babies to reduce the child's risk of developing a serious disease over his or her lifetime, the poll found.

Once the realm of science fiction, gene editing for babies is getting closer to becoming a reality thanks to the development of the gene-splicing technology known as CRISPR, which allows scientists to precisely cut and insert pieces of DNA. In 2017, U.S. scientists announced that they had used CRISPR to edit genes in human embryos to correct a mutation that causes a heart defect. (The embryos were discarded, and they did not progress far in development.)

Still, there are many safety and ethical issues surrounding editing human genomes that have yet to be explored. Currently, the U.S. Food and Drug Administration doesn't allow clinical trials that involve editing the germ line, or making genetic changes that can be inherited, according to The New York Times.

Interestingly, when asked to think about a future in which gene editing for babies is widely available, those surveyed tend to anticipate more negative effects over positive ones from the widespread use of the technology, the survey showed. Close to 60 percent of Americans say gene editing will "very likely" lead to increased inequality, because the technology will only be available for the wealthy. And a slight majority, 54 percent, say it is very likely that "even if gene editing is used appropriately in some cases, other people will use these techniques in ways that are morally unacceptable."

Only 18 percent say it is very likely that the development of gene-editing technologies will "pave the way for new medical advances that benefit society as a whole."

The survey is based on interviews with a nationally representative sample of more than 2,500 U.S. adults, conducted from April 23 to May 6.