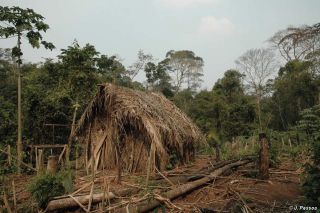 An isolated man believed to be the only surviving member of his tribe has been spotted in the Brazilian Amazon.

FUNAI, Brazil's indigenous affairs department, which monitors uncontacted people, released video footage this week of the man, nicknamed "the Man of the Hole," chopping trees with an ax in the state of Rondônia.

To protect him from external threats, FUNAI said it has been keeping tabs on the man from a distance for the last 22 years.

The agency said that in the 1980s, farmers, illegal loggers and land-grabbers encroached on the territory of isolated tribes in Rondônia, and many indigenous people were expelled from their lands or killed. During an attack in 1995, the remaining members of the Man of the Hole's already small tribe were killed, possibly by cattle ranchers. [Gallery: Images of Uncontacted Tribes]

"We don't know the name of his tribe or what language he speaks," the indigenous rights group Survival International said in a Facebook postabout the video. "His people were probably massacred by cattle ranchers who invaded the region. He survives because his territory is now, finally, being properly protected by the authorities."

The man lives in the forests of the Tanaru indigenous reserve, which was established in 2015. After confirming his location in 1996, FUNAI had tried to contact the man, but he has always resisted. (He has previously shot arrows at FUNAI workers who got too close.) Coordinators with the agency stopped making attempts at contact in 2005. Instead, they watch him from afar, and sometimes leave tools and seeds for planting in areas that he passes.

"I understand his decision," Altair Algayer, a regional coordinatorfor FUNAI, told The Guardian. "It is his sign of resistance, and a little repudiation, hate, knowing the story he went through."

The man got his nickname from the huge holes he has dug in the forest, either for trapping animals or hiding.

According to Survival International, Brazil is home to the world's largest population of uncontacted people, and 80 of these tribes are thought to live in the Amazon, subsisting through a mixture of hunting, gathering and fishing. Their lands and livelihoods are under threat from encroaching industry and development. Besides the risk of violence from contact with outsiders, these indigenous communities are especially vulnerable to diseases like measles and the flu, to which they have no immunity.

Groups like FUNAI and Survival International typically publish photos and videos of uncontacted people to prove the existence of these tribes, which is sometimes denied by loggers and others who wish to develop the forest reserves.