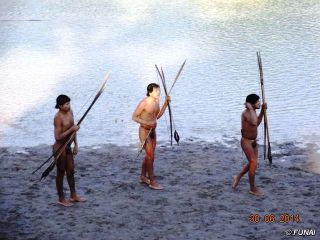 This image, released by FUNAI, Brazil’s Indian Affairs Department, shows a group of indigenous people who contracted the flu after making contact with a settled tribe.
(Image: © FUNAI)

Advocates for indigenous tribes and Brazilian officials are worried that a group of people in the Amazon who had been living in isolation from the outside world may have contracted the flu — a potentially deadly disease that these individuals had never been exposed to before.

Five young men and two young women became sick after they emerged from their remote home turf in Peru in late June and made contact with people living in a settled community. On three separate occasions, they voluntarily made contact with Ashaninka people in the village of Simpatia, just across the border in western Brazil's Acre state, said Fiona Watson, a researcher and field director with the advocacy group Survival International, who spoke with Brazilian officials who went to the region. During each visit, the newly contacted individuals were friendly with the Ashaninka people and stayed for several hours, Watson said.

But representatives from Brazil's Indian Affairs Department, or FUNAI, noticed that the group of seven showed signs of influenza during their visit on June 30, Watson said. Over the course of several days in July, these people received medical treatment for the flu and flu vaccines in case they later encounter other strains of the virus. They went back into the forest on July 11. [See Photos of Uncontacted Amazon Tribes]

The news worries advocates because uncontacted groups are extremely vulnerable to diseases to which they have no immunity. Past epidemics of malaria and the flu, for example, have devastated other tribes. What's more, this particular group may be at risk of violence from illegal loggers and drug traffickers in the region. Through interpreters, these seven individuals, who speak a Panoan language, reported that they were fleeing violent attacks in their home territory in Peru; they apparently came into contact with non-Indians who had fired gunshots at them near the source of the Envira River.

"The nightmare scenario is that they return to their former villages carrying flu with them," Stephen Corry, director of Survival International, said in a statement. "It's a real test of Brazil's ability to protect these vulnerable groups. Unless a proper and sustained medical program is immediately put in place, the result could be a humanitarian catastrophe."

In light of recent events, FUNAI reopened a post in the region that had been closed since 2011 when it was overrun by drug traffickers and illegal loggers. Officials with the Brazilian agency also said they were working with Peruvian authorities to monitor and protect uncontacted people in the area.

Survival International advocates say uncontacted tribes are not "lost" or "primitive" groups; rather, they are likely aware of their neighbors and have chosen not to make contact with wider society. Advocates estimate that there are about 100 uncontacted tribes in the world.