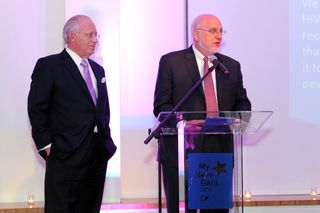 The director of the Centers for Disease Control and Prevention revealed why he has a personal stake in fighting the current opioid epidemic: His son almost died from using cocaine laced with the synthetic opioid called fentanyl.

"For me, it's personal. I almost lost one of my children from it," Dr. Robert Redfield Jr. said at the annual conference of the National Association of County and City Health Officials in New Orleans on Thursday (July 12), as reported by the Associated Press.

Redfield, who stepped into the role of CDC director in March, said that the opioid crisis is the "public health crisis of our time" and that it would be one of the agency's priorities.

In 2016, opioids — including prescription opioids such as oxycodone as well as heroin and fentanyl — killed 42,000 people, according to the CDC. That was up from 33,000 opioid-related deaths in 2015.

The CDC researchers attributed much of the increase to the rise in deaths from synthetic opioids not including methadone, which includes the illegally-manufactured fentanyl. Synthetic opioid deaths rose from 9,580 in 2015 to more than 19,000 in 2016, the report showed. [America's Opioid-Use Epidemic: 5 Startling Facts]

On average, in the United States, 115 people die every day from an opioid overdose, the CDC said.

In fact, opioids appear to be shaving time off the average U.S. life expectancy: A report released in September 2017 revealed that opioid-related deaths accounted for 0.21 years of life expectancy lost between 2000 and 2015, according to the report.

In a statement released Monday (July 16) and reported by the AP, Redford said, "It's important for society to embrace and support families who are fighting to win the battle of addiction — because stigma is the enemy of public health."

Fentanyl is 30 to 50 times more potent than heroin, according to the U.S. Drug Enforcement Administration. It's also cheaper than other drugs, offering "a high profit margin for traffickers," the DEA says. As such, manufacturers often mix it into counterfeit opioid pills. Since the substance is more potent than the drugs it's being mixed with, "it only takes a very small amount of fentanyl to cause a severe or potentially deadly reaction. As little as two milligrams is a lethal dosage in most people," the DEA says.