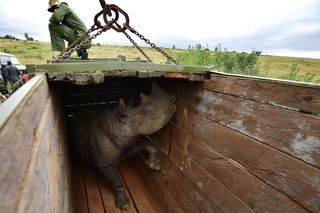 A female black rhinoceros about to be relocated from Nairobi National Park to Tsavo-East National Park in an effort to repopulate habitats around Kenya, on June 26, 2018.
(Image: © TONY KARUMBA/AFP/Getty Images)

A mission meant to save critically endangered rhinoceroses by transferring them to a wildlife sanctuary in Kenya has ended in tragedy, with the deaths of eight of the odd-toed ungulates, according to Kenya's Ministry of Tourism.

But the culprit wasn't poaching. Rather, it was likely salty water, the ministry said.

Preliminary investigations showed that once the black rhinos (Diceros bicornis) arrived at the newly created sanctuary in Tsavo East National Park, they gulped down water with a high salt content. The more salty water the rhinos drank, the thirstier they became, leading to a vicious cycle, the ministry reported on July 13. [Up and Away! Photos of Rhinos in Flight]

The loss is "shocking news," said Paula Kahumbu, the chief executive of WildlifeDirect, a conservation group in Kenya.

"This translocation can only be described as a complete disaster," Kahumbu wrote on her Facebook page. "Kenyans must demand an explanation and full transparency, as well as reassurances that we will adopt the best practices in wildlife translocations to learn from this disaster and prevent it from ever happening again."

The Kenya Wildlife Service had originally planned to translocate 14 black rhinos from two of Kenya's national parks: Nairobi and Lake Nakuru. However, after 11 of the rhinos were relocated, eight of them died, the ministry said in a statement. Park management is now closely monitoring the remaining three rhinos.

The surviving translocated rhinos are also "being provided with fresh water in temporary water pans as we await the full postmortem examination report and further forensic investigations," the ministry said.

Moreover, the last three of the 14 rhinos on the relocation list will no longer be moved to the park, the ministry noted. These 14 rhinos were part of an initiative to start a new population, which was part of a plan outlined by the National Rhino Conservation and Management Strategy.

In the past, Kenya has had success with rhino relocation. Between 2005 and 2017, of the 149 rhinos the country translocated, just eight died. (These eight deaths are separate from the newly deceased rhinos.)

Black rhinos are critically endangered. There were about 850,000 black rhinos in the 20th century, a number that dwindled to just 4,880 by 2010, according to the International Union for Conservation of Nature.

Meanwhile, the last male northern white rhino, named Sudan, died in March. Many rhino species face extinction because of the demand for their horns on the black market — largely due to unproven claims that their horns can cure various ailments, Live Science previously reported.