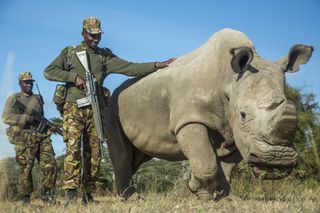 Ol Pejeta Conservancy in Kenya, where the rhino spent his last years, announced the death of the 45-year-old rhinoceros, saying that his health worsened to a point that he was suffering and unable to walk. Officials there made the decision to euthanize the rhino.

"He had been suffering from age-related health issues and from a series of infection[s]," Conservancy staff said in a statement. "Once his condition worsened significantly and he was unable to stand up and evidently, suffered a great deal, the decision to euthanise him was made by his veterinary team."

"We on Ol Pejeta are all saddened by Sudan's death. He was a great ambassador for his species and will be remembered for the work he did to raise awareness globally of the plight facing not only rhinos, but also the many thousands of other species facing extinction as a result of unsustainable human activity. One day, his demise will hopefully be seen as a seminal moment for conservationists world wide," Richard Vigne, Ol Pejeta's CEO, said in a statement on Facebook.

Sudan was born around 1973 or 1974 in South Sudan. At just a year or two of age, he was captured from the wild along with several other of his subspecies and taken to the Dvůr Králové Zoo in what was then Czechoslovakia and is today the Czech Republic.

Captivity probably saved Sudan's life. Poaching became a rampant problem in Central Africa, the range of the northern white rhinoceros subspecies, in the 1970s and 1980s, according to the conservation organization Save the Rhino. By the 1990s, only a few dozen northern white rhinos survived in Garamba National Park in the Democratic Republic of Congo. The Second Congo War in the late 1990s and early 2000s caused massive instability and human suffering in the country, leaving rhino conservation far on the back burner. According to Save the Rhino, militant groups took advantage of the rhinos at Garamba, poaching them and selling their horns on the black market to raise funds for the fighting. The last documented sightings of northern white rhinoceroses in the wild were in 2006.

As the northern white rhinoceros dwindled, its close relative, the southern white (Ceratotherium simum simum) was experiencing a resurgence. Down to fewer than 20 animals in the early 1900s, the southern white recovered thanks to conservation and managed-hunting efforts, and there are now more than 20,000 of them in the wild.

The northern and southern white subspecies genetically diverged from one another about a million years ago, according to a 2010 paperpublished in the journal PLOS ONE, but if another northern white is ever born, it will be from a southern white rhino mother.

In a last-ditch effort at natural mating, the Dvůr Králové Zoo moved four northern white rhinos to Ol Pejeta in 2009, including another male, Suni, who died in 2014. Sudan spent his days at the reserve in a 700-acre enclosure, supplied with grazing fodder and vegetables, and watched over by guards with firearms to prevent poaching. (Poaching from captivity has occurred. In 2017, armed men stormed a rhino orphanage in South Africa, holding staff hostage and killing two baby rhinoceroses. A month after that attack, a rhinoceros was found dead in its enclosure in a French zoo with its horn sawed off.)

In 2014, Sudan was sedated for semen collection in the hopes that he might be able to fertilize offspring through assisted reproductive technology. An international group of conservationists, following a plan laid out in 2016, is aiming to develop "in vitro" fertilization techniques for the northern white rhinoceros, possibly combined with stem cell technology to convert banked northern white rhino body cells into sperm and eggs. Any viable embryos would be implanted into southern white rhinoceros surrogate mothers.

Sudan's sperm quality in 2014 was disappointingly low. In his last years, Sudan began to exhibit other signs of age-related decline. He suffered two age-related infections in his back leg at the end of 2017 and in March 2018, the latter of which was slow to respond to treatment.

"Sudan was being treated for age-related complications that led to degenerative changes in muscles and bones combined with extensive skin wounds. His condition worsened significantly in the last 24 hours," the conservancy said in their Facebook statement, adding that "the veterinary team from the Dvůr Králové Zoo, Ol Pejeta and Kenya Wildlife Service made the decision to euthanize him."

Though Sudan's death doesn't change the odds of seeing new northern whites born in the future, it has extreme symbolism, Jan Stejskal, the director of communications and international projects at Dvůr Králové Zoo, said after Sudan's health scare in March 2018.

"It's really a symbol of how we treat nature," Stejskal told Live Science. "It's a large animal, a beautiful animal that roamed a large part of central Africa. And we've got them to the brink of extinction."

The conservancy saw Sudan's death from an even darker perspective, saying: "It is desperately sad to witness the manifestation of human greed in the wiping out of these majestic animals. How many more species that we share this earth with will fall the same way before we understand the enormity of what we are doing?"