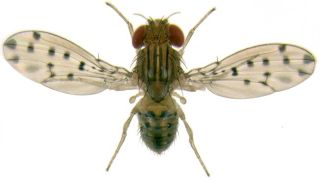 The forest can be a blur of color and patterns, from the rosette spots on leopards and stripes adorning tigers to psychedelic butterflies and polka-dotted flies. Exactly how these animals got their funky coats has been a mystery ... until now.

New research gets to the bottom of why certain fruit flies (Drosophila guttifera) are decorated with 16 spots on their wings, a finding that could apply to larger animals as well, the researchers say. The spot-stripe maker is a so-called morphogen, which is a protein that tells certain cells to make pigment.

By inserting the gene linked to this morphogen into different parts of the fly's genome, the researchers created flies with wings covered in stripes rather than spots,.

"We can make custom flies," said Sean Carroll, a molecular biologist at the University of Wisconson-Madison, and the senior author of the report published this week in Nature.

While past studies have come up with theoretical answers to the pattern mystery, such as how leopards got their spots, this is the first study to show concrete evidence for a long-hypothesized system for generating animal color patterns.

"For the prior six decades with respect to color pattering all sorts of schemes had been proposed but they aren't experimentally testable until you have actual molecules and knowledge of the development of the system," Carroll told LiveScience.

Carroll and his colleagues solved the mystery through some detective deducing. They answered basic questions such as: Do we think all the spots are made by the same mechanism? When they found evidence that one protein was responsible for the spots, they tried to "guess," Carroll said, what that protein might be. Then he called up a couple of scientist friends, and they thought a molecule called "Wingless" could be the culprit.

Here's how it works: The group discovered the color-inducing morphogen in embryonic tissue of the fruit flies, and found it was encoded by the Wingless gene. Late in wing development, the Wingless morphogen diffuses through tissue where it prompts cells in certain areas of the wing to make pigment.

"The key thing is it's diffusing out from a source, so you have only a point source of Wingless, and when it diffuses out in all directions it can make a spot," Carroll said.

In this species, the morphogen gets produced in proximity to existing physical landmarks such as the intersections of veins on the wing. The positioning of the spots is dictated by these pre-existing patterns.

The researchers say Wingless has been linked with pigmentation, or coat designs like zebra stripes, long before it popped up as a polka-dot maker for this fly species.

"What's happened is that connection between Wingless and pigmentation has been exploited to make much fancier and obvious patterns," Carroll said. "Once there is a tool, in this case a little pathway, for making pigmentation, using that pathway in new places gives you new patterns. Just deploy the wingless molecule in the wing and get a fancier pattern."

As with anything in evolution, the emergence of new body patterns takes time.

"By tracking where this came from in other species, we can see how the complex pattern has evolved," Carroll said. "This isn't an overnight thing where there was a patternless wing and then, boom, you've got 16 spots."