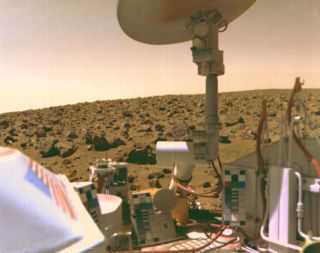 Viking 2 takes a selfie on Mars’ Utopian Plain. While analyzing the nearby soil, the NASA lander may have inadvertently destroyed the first signs of life on Mars.
(Image: © NASA/JPL)

In the late 1970s, two Viking robots sailed to Mars, pillaged the soil and burnt any traces of life they found.

That was never the plan, of course. When NASA first landed the twin spacecraft named Viking 1 and Viking 2 on the surface of Mars 40 years ago, scientists were ecstatic to finally start studying Martian soil for signs of organic (carbon-based) molecules that could prove the Red Planet was hospitable for life. It should've been a slam-dunk mission. The pockmarked face of Mars was constantly being pelted with tiny, carbon-rich meteorites, after all — detecting signs of that carbon was thought to have been a sure thing.

But it wasn't. After half a decade of studying the planet, neither of the Viking landers could find any evidence of organic matter. Why not? NASA's Curiosity rover confirmed the presence of organic molecules on Mars earlier this year, so what was Viking missing?

A new paper, published June 20 in the Journal of Geophysical Research: Planets, provides an explanation. The carbon was there all along, the researchers wrote; unfortunately, the Viking landers set it all on fire.

"A total of four [soil] samples were analyzed, each multiple times, by rapidly heating the sample to one of four temperature steps," researchers from NASA's Ames Research Center in California and the Atmosphere, Media, Spatial Observations Laboratory (LATMOS) in France, wrote in the new study.

The Vikings heated up their soil samples to a maximum temperature of 932 degrees Fahrenheit (500 degrees Celsius) to try and release any volatile organic compounds trapped within those samples. If there had been any carbon there, the traces should have been detectable in the soil's vapor. So, why wasn't it? According to the authors of the new study, there may have been something else in the soil that NASA didn't bargain for — a hyperflammable fuel that accidentally burned the carbon to bits.

In 2008, a Mars rover named Phoenix was scooping up soil near the Martian north pole when it found evidence of an unusual salt called perchlorate. This was an exciting find at the time; scientists knew that ancient microorganisms on Earth used perchlorate as a source of energy. Perhaps, they thought, this Martian cache of salt served a similar purpose?

The authors of the new study were excited by the salty discovery for a different reason: Perchlorate is flammable — so flammable it's used on Earth today mainly to make rocket fuel and fireworks burn faster. If perchlorate is abundant in Martian soil, the researchers told NewScientist, then Viking's attempts to heat that soil may have caused the perchlorate to catch fire and instantly obliterate any organic molecules that may have been there.

The silver lining to this scenario is, if Martian perchlorate did indeed incinerate any carbon-based molecules in Viking's oven, then there would be evidence in the ashes. When carbon burns with perchlorate, it produces a molecule called chlorobenzene — a mix of carbon, hydrogen and chlorine that can last in soil for months. As luck would have it, NASA's Curiosity rover detected traces of chlorobenzene in Martian soil during a 2013 expedition. For further evidence, the researchers decided to go back to Viking itself.

"We searched the Viking data for a possible reaction product between the salt and organics in the Viking oven," the researchers wrote. The team reanalyzed the original data sets taken during the Viking mission, this time looking specifically for traces of chlorobenzene.

According to their new paper, the researchers found what they were looking for. The team saw trace amounts of chlorobenzene in samples taken by Viking 2, concluding that the lander may well have held organic matter in the palm of its robotic hand before inadvertently setting the whole lot ablaze.

Study author Melissa Guzman, a doctoral student at the LATMOS research center in France, told NewScientist that, while this new evidence is compelling, it's not definitive proof of Martian organics. It's possible, for example, that the carbon compounds burned along with the Martian perchlorate in Viking's oven actually originated from Earth and accidentally contaminated the samples.

Other scientists are ready to believe. Daniel Glavin, a researcher at NASA’s Goddard Space Flight Center in Maryland, who was not involved in the study, told NewScientist that this paper "seals the deal" on Martian organics. Indeed, the study suggests that organic molecules might exist at many sites all over the Red Planet. Whether that means there's microbial life there — and whether humans can confirm that life before setting it ablaze — remains to be seen.