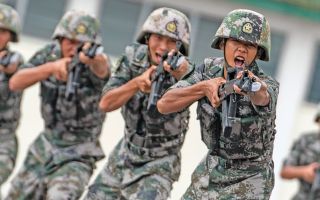 Members of the People's Liberation Army perform drills during a demonstration on June 30, 2018, in Hong Kong. China's military may soon have laser guns in its arsenal.
(Image: © Anthony Kwan/Getty, file)

The laser blasters in "Star Wars" are no longer a thing of science fiction. Chinese researchers have developed an actual laser gun that can ignite a target on fire from a half mile (800 meters) away, the South China Morning Post reported.

But this new weapon, called a ZKZM-500, has a few differences from the "Star Wars" version. Based on an artist's depiction of the gun published in the South China Morning Post, this real-life version is a boxy-shaped assault rifle that resembles a large toy gun more than a sleek "Star Wars" blaster. The 15 mm caliber weapon weighs about the same as an AK-47, 6.6 lbs. (3 kilograms), and can fire more than 1,000 laser shots, each one lasting up to 2 seconds.

The South China Morning Post reported that the weapon produces a silent, invisible energy beam — a  characteristic that makes it stealthy, but likely not as satisfying to shoot as a "Star Wars" blaster would be. It'll be powered by a rechargeable lithium battery similar to what's found in smartphones. [The 22 Weirdest Military Weapons]

Although the gun is classified as a nonlethal weapon, its laser shots can cause "'instant carbonization' of human skin and tissues," according to the South China Morning Post, which means skin would burn and be reduced to carbon like the outside of a charred marshmallow. It can also fire through windows, burn through gas tanks and ignite anything that's flammable. And, because the shots are silent and invisible, "nobody will know where the attack came from. It will look like an accident," one of the gun's creators told the South China Morning Post.

But it'll take several zaps to burn a hole through a body and kill someone with this gun. The South China Morning Post reported that it's not designed explicitly for killing like a gun that uses bullets, which is why the Chinese government classified the laser weapon as nonlethal. A government document suggests the laser gun could be used to do things such as setting fire to illegal banners at a protest or setting fire to the hair or clothing of a protester.

The weapon is ready for mass production, but its creator, ZKZM Laser, hasn't found a licensed weapons-production company ready to take the guns on at $15,000 a unit, yet.

Sorry, "Star Wars" fans — once they're made, these futuristic weapons will be distributed only to Chinese military and police.