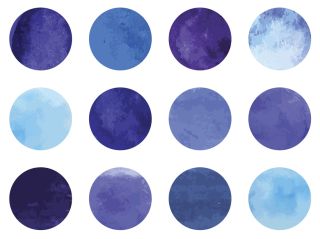 Purple or blue? A new optical illusion study finds that your answer will change based on your expectations.
(Image: © Morjachka/iStock/Getty)

A new optical-illusion study in the journal Science asks whether a series colorful dots is purple, blue or proof that humans are doomed to a lifetime of sadness and poor decisions.

In the study, published June 29, a team of scientists from Harvard, Dartmouth and New York University showed several groups of American college students a series of 1,000 dots that ranged in color from very blue to very purple. (You can see the full spectrum in the video below.) The participants had to answer just one question: Is the dot on the screen blue or not?

It sounds simple, and at first, it was. For the first 200 trials, the participants were shown an equal number of dots from the blue and purple parts of the spectrum, and most participants recognized the differences pretty well. However, across the remaining 800 trials, the number of blue dots steadily dropped until the participants were shown almost exclusively shades of purple. Counterintuitively, their answers did not reflect this. [Optical Illusions: A Gallery of Visual Tricks]

"When blue dots became rare, participants began to see purple dots as blue," the researchers wrote in the study. Indeed, during the final 200 trials, dots that the participants previously identified as purple now looked blue to them. The participants continued mistaking purple dots for blue ones even when they were specifically warned that the number of blue dots was going to decrease or when they were offered a $10 reward for responding to repeated colors the same way at the end of the study as they did at the beginning of the study.

So, why the sudden change of perception? According to the researchers, it could be that the human brain doesn't make decisions based on cold, hard rules, but rather on prior stimuli. As the balance of blue-to-purple dots shifted, the participants expanded their definition of what "blue" really looked like in order to match the expectations formed from the earlier trials.

Poo Popsicles: ethical or no?

The bottom line here, as with most optical illusions, is that your magnificent human mind is really, really easy to dupe. No news there. But, to demonstrate some potential real-world consequences of this mental design flaw, the researchers went a few steps further and conducted two more experiments in which the "blue or purple" decision was replaced with something a little weightier.

These results were replicated in a final experiment in which participants were shown 240 proposals for fake research projects. These mock proposals ranged on a spectrum from ethical (e.g., "participants will make a list of the cities they would most like to visit around the world, and write about what they would do in each one") toreally unethical (e.g., "participants will be asked to lick a frozen piece of human fecal matter ... The amount of mouthwash used [afterward] will be measured").

"These results may have sobering implications," the researchers wrote.

If your brain is constantly recalibrating its perceptions based on prior experiences, how can you be sure you're ever really seeing things as they are? Looking at the bigger picture, can human societies ever truly solve their problems — crime, poverty, prejudice, etc. — if they're constantly expanding their definitions of those problems to include fresh transgressions?

"Although modern societies have made extraordinary progress in solving a wide range of social problems, from poverty and illiteracy to violence and infant mortality, the majority of people believe that the world is getting worse," the researchers concluded. Perhaps, they said, the more problems a society solves, the more that society expands its definition of what's problematic. It's not so much that the glass of water is half empty — maybe we just perceive the glass getting bigger and bigger before our eyes.