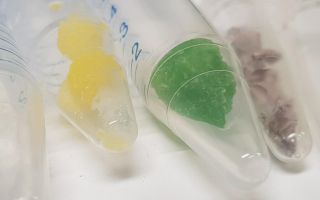 Spider eggs come in brilliant colors and look like candy, as was demonstrated by a striking photo shared to Twitter on June 26.

But lest you be tempted to "taste the rainbow," please hold back, as some spider eggs are known to be toxic, according to a study published in August 2017 in the Journal of Arachnology.

In the image, two vials hold egg clusters from two Australian spider species: One clutch is a brilliant green and comes from a huntsman spider in the Holconia genus, and the other eggs are vibrant yellow and laid by Cyrtophora, or tent-web spiders.

These translucent eggs look a lot like a delicious gummy candy, though when the tweet was circulated around the Live Science newsroom, one of the editors noted that the eggs would be "THE WORST CANDY EVER." [5 Spooky Spider Myths Busted]

The photo is all the more astonishing because spider eggs are so seldom seen, said Glenn King, the scientist who posted the tweet. King is an investigator with the Centre for Pain Research at the University of Queensland (UQ) in Australia; his "bugs and drugs" lab analyzes spider venoms as drug candidates for nervous system disorders.

Tiny, delicate spider eggs are usually tucked away in opaque web sacs, and so despite their bright coloration, they are very difficult to spot, King wrote in the tweet.

Scientists with King's lab recently collected the colorful spider eggs on and around the UQ campus: In addition to the green and yellow eggs, there were orange ones produced by spiders in the Argiopegenus and bluish-purple eggs laid by Zosis geniculata, also known as the humped spider, Isaac Tucker, a graduate student at QU, told Live Science in an email.

"We have been able to observe spider eggs from virtually all of the different colors of the rainbow," Tucker said.

But with an estimated 100,000 spider species on the planet, researchers don't know enough about spider eggs to say how many species lay brightly colored eggs, Tucker said.

Just why the eggs are so colorful also remains uncertain, though there may be some clues in another animal group known for colorful eggs — birds.

"In chickens, the different colored eggs are due to differing levels of colored chemicals, which change from species to species, and spiders may follow a similar path," Tucker wrote in the email. "But until further research is conducted we can't be sure."