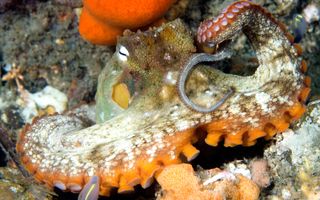 The heat-loving cephalopod, also known as the common Sydney octopus (Octopus tetricus), has expanded its territory from the shores of New South Wales on the east coast of Australia down to the now-warmer waters off the northeast coast of Tasmania, an island state about 150 miles (240 kilometers) south of the mainland. Researchers mapped the gloomy's range expansion and reported their results in a study published June 22 in the journal Scientific Reports.

The gloomy octopus, named for its droopy-looking white eyes, is a little bigger than a beach ball (80 centimeters, or 31.5 inches across) and has a tentacle span of up to 2 meters (6 feet), according to the Australian Museum. Historically, this creature's range was limited to the rocky tidal shores of eastern Australia; that was true until about 2000, when the octopuses were first found off the southern coast of the Australian state of Victoria, Oceana reported.

Scientists discovered the breadth of the gloomy's range expansion thanks to recreational fishermen and divers reporting their cephalopod sightings to Redmap. This citizen science project was created by study co-author Gretta Pecl, a marine ecologist at the University of Tasmania. "People send in photo observations," Pecl told Oceana. "We get an early indication of what species might be shifting, and then we initiate a more targeted research study."

The data from the citizen science project led to the new study from Pecl and her colleagues, which confirms the gloomy octopus' southward range expansion. And thanks to persistent gene flow from the animals' historical population — meaning genes from one population are carried to another — and moderate genetic diversity, the species is likely to adapt nicely to its extended habitat and may continue to expand its range, the scientists predicted. [In Photos: Octlantis: See Photos of Tight-Knit Gloomy Octopus Communities]

But while the gloomy octopus seems well-adapted to its new home, its territory expansion has fisheries experts worried. That's because these eight-tentacled outsiders love to chow down on shellfish such as abalone and rock lobster, which make up the most-profitable fisheries in the region, Oceana reported. Another predator is the last thing the struggling shellfish population needs after combatting fatal marine heat waves caused by increasingly warm currents.

An octopus fishery aimed at gloomies might be a win-win solution for fishers and shellfish populations. Craig Hardy, a Tasmanian fisherman, told Oceana that fishermen in the area have historically caught smaller octopus species. But the larger size of the gloomies makes them a more attractive catch, he said.

The gloomy octopus is just the latest example of dozens of species carried south by the East Australian Current in recent years, Oceana reported. The gloomy's expansion is also part of a larger, growing trend of shifts in wildlife territory caused by climate change.